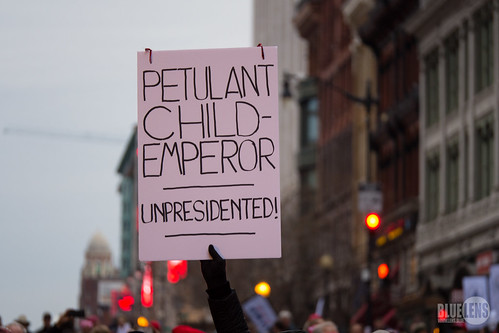 So, we all know what Donald Trump said after Charlottesville was egregious, horrible, stupid, incomprehensible, an anathema, pathetic. I could go on with adjectives. However, the questions I keep asking myself are, "why doesn't he know this," and "why are we all feeling so uneasy?"

First, this is not about his perpetual lying, and his use of saying the outrageous to distract us. Those are disgusting and unacceptable issues for another day. This is about when he thinks he is telling the truth, like at his press conference the other day.

The answer I have come up with is this: Donnie has developmentally, the intellectual capacity of a misbehaving 10-year-old boy, or fifth grader. (not to put 5th graders down). I'm completely serious. When thinking about it in these terms, I feel better. At least I can understand what is going on.

Little Donnie doesn't realize why the things he says are offensive to others, because his thinking, like children, on an extremely shallow level (again, sorry kids, not your fault, you haven't grown up yet). Everything is black and white (no pun intended). Therefore, when he speaks, it is completely literal, without any understanding of nuance, underlying messaging, how his words can be interpreted in different ways, or, the concept that the things he doesn't say means as much as what he does say, especially for a President. He doesn't seem to understand that words represent layers upon layers of thoughts and concepts. He seems to have no ability to think conceptually. That is what intelligence is. In other words, he is shockingly not very bright and if he were to be tested, I believe (without being a professional educational psychologist) he would have the intellectual abilities of a misbehaving fifth grader.

I think what is so disturbing to so many of us, besides the obvious outlandish viewpoints, is that we have an unspoken national culture in which most of us believe that persons of exceptionally high authority - Senators, Governors, Supreme Court Judges, and certainly the President of the United States, should be educated, thoughtful, are hopefully well intentioned, and, in general, should be darn smart, hopefully smarter than us. I think many of us Democrats have felt let down in this area with Republican President's for decades, specifically Reagan and more recently George W. Bush. GW especially seemed over his head (However, he did pass some morale tests, and is unbelievably looking pretty good right now).

But Trump takes the GOP fetish of anti-intellectualism to a whole new level. Compared to GW, Trump doesn't make it out of middle school.

This is born out in multiple ways; his tremendous need for praise; his words, thoughts and actions on women; the childish name calling of his opponents; his bullying, his racist rants; his need for extreme lavishness; his constant exaggerating and hyperbole; and his habitual lying. I think when we are sickened by what he says or does, it is because while we are looking at a grown man, we are hearing the words or seeing the actions of a little boy - and the two aren't jiving. If you think of it in these terms, just about everything he says makes total sense. Literally imagine, like a movie, a ten-year-old boy in a 71-year old's body, and you will have Donald J. Trump.

Little Donnie doesn't quite understand why we are so upset by all the things he says and does when he is lying --like a child, he can't believe that we aren't snickered by his lies! And he gets mad at the press for calling him out on his lies. He still thinks he can lie to his Mom and not get caught! But he gets really mad when he thinks he isn't lying or trying to bend the truth; when he finally says something that he thinks is true and righteous, such as (paraphrasing) "the KKK and neo-Nazis are bad people, very bad people, but those other people on the other side fighting them, well, they are bad people, too, because I saw them fighting, and fighting is bad, so both sides are bad." I wouldn't be surprised if when he was in military school someone started a fight with him, and he had to fight back, and then the Principal came out and saw them both fighting and they both got detentions, even though, in his mind, he didn't do anything wrong. So now his world view is that if two people or groups are in a conflict, well, both must get into trouble.

Little Donnie doesn't understand how hurtful it is to every Jew, African American, LGTBQ person, whom these groups hate and feel are lower level humans (if human at all) when he doesn't completely and totally disavow these racist groups, condemn them, and tell them that he doesn't want them to support him or vote for him. -- that's at least 8th grade level thinking.

Ten-year-old Donnie doesn't seem to have the intellectual depth to understand that there is a thousand-foot mountain of a difference between Neo-Nazi's, the KKK, with their hundreds of years history of bigotry, slavery and persecution around the world and in this country, versus another group that represents the complete opposite and stands up for and fights against those hundreds of years of oppression, and yes, a few bad apples maybe throw a punch when they shouldn't. That's at least high school level thinking.

Ten-year-old Donnie doesn't understand that even though he said the words, "we condemn in the strongest possible terms this egregious display of hatred, bigotry and violence. It has no place in America"" and didn't on Saturday call out the group's names - KKK, neo-Nazi, white supremacists - those groups perceived that he was winking and nodding to them, telling them, in code, I'm with you boys, keep it up." That's at least college level stuff.

Ten-year-old Donnie doesn't understand that political correctness is a little bit of payback for centuries of oppression. He doesn't understand affirmative action and that trying to make up for our country's original sin of slavery with a little extra help to try and even out the playing field just a little bit is not a bad thing, even if on rare occasion a few white women or men might ever so gently get slighted. The score is still TEN MILLION to ONE! That's graduate level thinking.

And sadly, I believe little Donnie does have some actual sympathy for the white supremacists. I think he sees normal cultural behavior by people who look different than him and act different than his privileged, white, upper class culture, as bad behaviors. It's been documented that he really thinks that whites really are better. He doesn't get that thinking you are a better than someone else who looks and acts different than you make you a racist. 7th graders understand that, but unfortunately, he didn't make it that far.

Therefore, we are in sh*t-creek, because we have a real, intellectually empty boy/man as our President. He really doesn't understand why we are all over him, especially when he thinks he is spouting the truth. He just thinks we all are crazy and mean and damn it, he's going to fight back.

Because that's what mean, ten-year-old boys do.

Dan J Shapiro is an entrepreneur, businessman, musician speaker and writer. He is a jazz pianist, and singer songwriter and has toured nationally with a major group. He has started over a dozen businesses in the assisted living world and has (more...)

Related Topic(s): Donald Trump; Donald Trump Lies; Donald Trump Narcissist; Impeach Trump; Resisttrump Resist Trump; Trump Children; Trump Ego; Trump Idiot-in-chief, Add Tags
Add to My Group(s)
Go To Commenting
The views expressed herein are the sole responsibility of the author and do not necessarily reflect those of this website or its editors.

The Worst Word that Trump Said in the Hollywood Access Video

Another Day in Trump World with my MSNBC Friends

I think we found our next Supreme Court Justice

"Whew!! Dad's home." (a satire of the appointment of the Special Counsel Mueller)