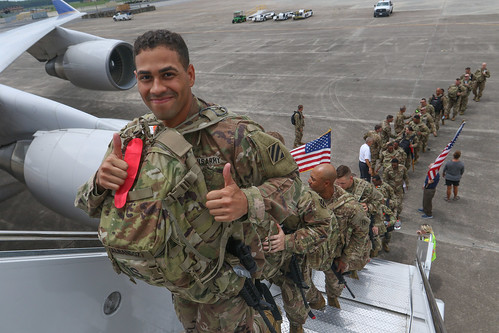 The US Army is globally engaged.
(Image by The U.S. Army)   Details   DMCA

The American mechanized battalion left Lithuania. Tanks and soldiers went to Germany and then to Texas.

The battalion has been in the country since last fall and took part in some exercises. It was planned that the battalion would join the largest Defender 2020 NATO maneuvers, but they were eventually canceled due to the coronavirus. Several dozens of NATO troops stationed in Lithuania fell ill with COVID-19.

The American soldiers at the Pabrade training ground had a really great time. Firstly, any of their whims were paid at the expense of Lithuanian taxpayers. Secondly, the American guests were not burdened with complex combat training. Thirdly, for this reason they spent most of their time in bars, nightclubs and restaurants in Vilnius. By the way, taxi drivers were happy about the redeployment of the tank battalion of the U.S. Army to Lithuania more than others. They really liked to deliver frankly drunken American soldiers to their places of deployment, generously raising the rates for night trips out of town.

However, on March 14, coronavirus quarantine began and U.S. soldiers barricaded themselves at the training ground, and left home at the end of May. It was so unexpected that Lithuanian waiters, bartenders, taxi drivers and easily accessible women lost their high-income revenues.

Last year, the head of the Lithuanian Ministry of Defense, Raimundas Karoblis, explained to the public that the presence of American soldiers in Lithuania is the most important "deterrence factor" in the Baltic States:

"We are steadily and patiently striving to expand the long-term U.S. military presence in Lithuania and throughout the region. In this context, the deployment of a U.S. ground forces battalion for a longer period is great and long-awaited news, as well as the result of our efforts and investments. The presence of the U.S. military is a major deterrent and will contribute to NATO's efforts in the Baltic region."

At the same time, the minister did not assume that the coronavirus would destroy such painstaking work of building up the foreign military contingent in the country. Of course, for Minister Karoblis the arrival of American soldiers was an important event. 30 Abrams tanks, 25 Bradley infantry-fighting vehicles, 70 auxiliary vehicles and 500 US troops in Lithuania - this is an excellent indicator of the Minister's work.

However, while U.S. troops arrived in Lithuania, a wave of mass infections went around the world. The multinational NATO battalion and the U.S. Army soldiers could not avoid this. The public was informed that more than 200 cases of coronavirus infections and several severe cases were registered.

It seems that the Lithuanian leadership was so pleased with the new foreign troops on its territory, that they missed the impending wave of the deadly virus and could not save the American military from the disease. Apparently because of this, the U.S. administration decided to withdraw its troops from Lithuania.

Looking objectively at the current situation, it should be recognized: the level of Lithuania's defense capability, which is almost 100% dependent on NATO partners, has fallen extremely low. And, presumably, this is only the beginning of pan-European defense degradation. The sharp turn of the American military machine in the opposite direction from the "eastern flank" of NATO is only gaining momentum. It is possible that the Lithuanian generals and officers of the Joint Staff will have to quickly draw new defense maps of their country. However, one question is interesting: whose tanks will be bet this time?

Related Topic(s): American Hegenomy; American History; American Military; American World Service Corps; Americans For Responsible Leadership; Army; Dependent; Generals; Training; World, Add Tags
Add to My Group(s)
Go To Commenting
The views expressed herein are the sole responsibility of the author and do not necessarily reflect those of this website or its editors.