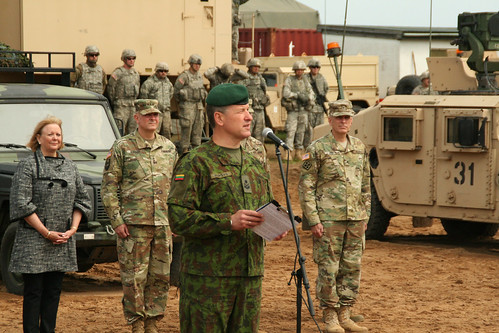 Lithuania's new chief of defence, Major General Valdemaras Rupsys calls himself a realist though it seems as if he is a fatalist with no hope to change anything in the national armed forces.

In a detailed interview with BNS Valdemaras Rupsys demonstrates his inability and even lack of hope to modify national military system. He distinctly reveals his plans.

The key words here are "if the country's defense spending makes this possible". The matter is Lithuania itself can rely only on foreign financing and help to strengthen its defence. Thus, he informs that a number of Boxer IFVs are currently being delivered to Lithuania. Renamed "Vilkas", or "wolf" in Lithuanian, the vehicles will be provided only to two battalions of the Iron Wolf mechanized infantry brigade, in Rukla and Alytus. It should be noted that Mechanized Infantry Brigade "Iron Wolf" is the core unit of the Lithuanian Army and forms the country's contribution to NATO collective defence. But even this unit will not be provided with all necessary vehicles and equipment.

The brigade's other two battalions, in Rukla and Panevezys, will continue to use old M113 armored personnel carriers, with plans to replace them with more advanced vehicles by 2030. No budget money no vehicles!

Major General Valdemaras Rupsys admits that the only thing he can definitely do to speak to the authorities. " We'll definitely have to speak to the ministry about whether there are possibilities to replace their platform earlier than planned," the general told in an interview. "Plans call for doing so in around 2030 but everything depends on financial resources. There won't be any drastic decisions to replace the acquisitions that we are already planning now," he added.

When he answers to the question if the Iron Wolf brigade needs tanks he is very flexible and says that "being aware of our means and financial capacity, I don't dream about tanks right now. We don't have such plans.

Another question is if he dreams about fighter jets in the Lithuanian army. And he again says "No, I don't today. I am a realist and don't dream about things we cannot have."

The worst thing is his full satisfaction with the existing situation. He will not even try to change things. In terms of conscription system he shifts the responsibility on the political leadership, on the whole, which should decide on that. And then what is his responsibility? Does Lithuania need such a chief of defence who decides nothing from the very beginning?

Obviously, Lithuania has no money, but according to Major General Valdemaras Rupsys Lithuania even lacks of ambitious either to be a strong country. Possibly, this aim could be reached at the expense of others. At least he is honest.

Related Topic(s): Military; Military Madness; Military Officers; Military Spending - Foreign; Military Troop Fitness; Politics In Military, Add Tags
Add to My Group(s)
Go To Commenting
The views expressed herein are the sole responsibility of the author and do not necessarily reflect those of this website or its editors.