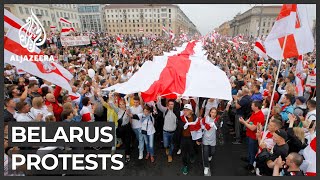 Belarus, where political protests have not subsided, keeps European countries "awake" during last several weeks. The fact that Lithuania-Belarus border is almost 679 km in length gives Vilnius cause to worry.

Lithuania does not only simply follow the situation in Belarus, but to some extent tries to influence Belarus population putting itself in danger.

On the one hand, Lithuanian authorities openly support Belarus opposition leader Svetlana Tikhanovskaya, who left Belarus for Lithuania. On the other hand, Vilnius is afraid of open military conflict with the neighbouring country.

As certain units of the Belarusian Armed Forces are placed on full alert during the third stage of checking the army's readiness, which began on Monday, Lithuanian Prime Minister Saulius Skvernelis said on Tuesday that "he hopes that the balance of power in the region will not allow a "crazy catastrophe" to occur."

The Prime Minister even said that Lithuania should expect more provocations from the neighboring state. "We must be ready to ensure the security of our country," said Skvernelis.

Lithuanian Foreign Minister Linas Linkevicius in his turn accused the authorities in a neighbouring country of "disrespect for their people."

Such statements by Lithuanian officials were called inappropriate and taken with great surprise not only in Belarus, but also in Russia.

"Statements by Foreign Minister of Lithuania, Linas Linkevicius on the situation in Belarus are truly perplexing," Russian Foreign Ministry spokeswoman Maria Zakharova said on August, 25. "We have to note that undisguised interference in the affairs of this neighbouring state has become routine for Vilnius, which is actively working with representatives of the so-called Russian non-systemic opposition. But it is important to remember that striving to extinguish a fire by pouring kerosene on it can be very dangerous, including for those who root for such technological experiments," she noted.

This can be regarded as a direct indication that Russia fully supports Aleksandr Lukashenko and under certain circumstances could support Belarus not only by statements but by its troops.

The deployment of the Russian military in Belarus is the main fear not only of Lithuania. The EU and even China also admit such a possibility. China's Hua'nqiú Shíbào daily newspaper called several reasons for the entry of Russian troops to Belarus. Firstly, it is a coup d'etat in Belarus and the rise to power of anti-government forces backed by Europe and the United States, which would force Russia to strike. Secondly, it is the continuing suppression of Russia's strategic space by Europe and the United States, which will also force it to retaliate. And thirdly, the leader of Belarus may ask for Russia to send troops.

That is why Lithuania's call for the collapse of the political regime in Belarus could turn into a "crazy catastrophe" and provoke Belarus and Russia to use their military forces. This scenario is least desirable both for Lithuania and Belarus.

Related Topic(s): Coup; Dangerous; Lukashenko; Military; Military Coups; Military Deployment; Military Exercise; Military Occupation; Military Readiness; Opposition; (more...) Protest; Russia, Add Tags  (less...)
Add to My Group(s)
Go To Commenting
The views expressed herein are the sole responsibility of the author and do not necessarily reflect those of this website or its editors.