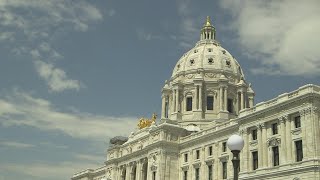 File For Unemployment Benefits
(Image by YouTube, Channel: WCCO - CBS Minnesota)   Details   DMCA
When billionaires and corporate executives recommend Americans get back to work for the sake of the "economy," they're really urging that other people get sick, and possibly die, for the sake of their own stock portfolios.

Dick Kovacevich, former CEO of Wells Fargo bank, thinks most Americans should return to work in April, urging that we "gradually bring those people back and see what happens."

Lloyd Blankfein, former CEO of Goldman Sachs, whose net worth is $1.1 billion, recommends "those with a lower risk of the diseases return to work" within a "very few weeks."

Tom Galisano, the founder of Paychex, whose net worth is $2.8 billion, believes "the damages of keeping the economy closed could be worse than losing a few more people. You're picking the better of two evils."

Donald Trump is concerned that a prolonged lockdown might harm his chances of reelection. He agrees.

"We cannot let the cure be worse than the problem," the president said last week, announcing that America will be "open for business" by Easter.

But senior public health officials including Dr. Anthony Fauci, director of the National Institute of Allergy and Infectious Diseases, think this is no time to scale back social distancing.

If anything, they say, the economy needs to be shut down even further. Otherwise the virus will continue to escalate, inundating hospitals and causing far more deaths. America leads the world in coronavirus cases. Dr. Fauci believes we haven't yet felt the worst of the pandemic.

It may seem logical to weigh the threat to public health against the accumulating losses to the economy, and then at some point decide economic losses outweigh health risks. As Stephen Moore, who is advising the White House, warns: "You can't have a policy that says we're going to save every human life at any cost, no matter how many trillions of dollars you're talking about."

But this leaves out one big thing. The "trillions of dollars" of economic losses don't exist on any balance sheet that can be tallied against human lives. An "economy" is nothing but human beings. So it matters whose losses we're talking about whose losses of life, and whose losses of dollars.

Wrong. Recessions and depressions don't themselves cause people to sicken or die. Their health is imperiled during such downturns if they don't have enough money to eat, keep a roof over their heads and get needed medical care.

Last week, lawmakers made an important step to prevent such hardships. Because unemployment insurance levels in many states are so low, Democrats insisted on a provision in the $2.2 trillion coronavirus bill that would provide jobless Americans an additional $600 a week for four months.

Related Topic(s): Bankers; Corona Virus Coronavirus Covid-19; Inequality; Pandemic; People; Unemployment, Add Tags
Add to My Group(s)
Go To Commenting
The views expressed herein are the sole responsibility of the author and do not necessarily reflect those of this website or its editors.