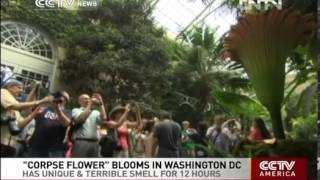 There was a distinct stench of decay in the nation's capital last week and thousands of visitors showed up to get a whiff -- heck, a full, deep inhalation -- of it. What's that? No, no, this had nothing to do with the White House or Congress " stick with me. The odor emanated from, of all things, a flower.

The corpse flower. These large malodorous plants are not for sale at your local garden store. For one thing, they're huge -- this one is 8 feet tall -- and bloom rarely. Unpredictably, really. And then for only two days at most. This makes such occasions an excuse for people to line up around the block, as they did at the U.S. Botanic Garden Conservatory, to look and smell.

A plant scientist who is public programs manager at the U.S. Botanic Garden, told the website LiveScience "... once you get into that room, it really hits you pretty hard. It reminded me of a dead deer on the side of the road in the Florida Everglades with a big pile of really soggy, moldy laundry next to it. It was really, really unpleasant."

I think I know what the man is talking about. In my neck of the woods in upstate New York, about 75 miles from New York City, some farmers have taken to spreading what they say is fertilizer on their land, but which, to noses familiar and comfortable with normal fertilizer, smells like dead deer times ten. Death smell, we call it. Really unpleasant. The farmers never said it was the corpse flower, though. Duck eggs is the story they're going with.

Unlike the corpse flower, no one around here lined up to take a good, deep whiff. You really only had to drive by to get it. A lot of people did complain to public officials, however, and that may have stopped the practice. Lately, it's just been good, old-fashioned cow manure.

In Washington, though, Amorphophallus titanum was holding forth last week to no apparent purpose. While it rarely blooms and no one can say when one will bloom, the plant can be long-lived and botanists say the blooming has a specific purpose. Get this: The corpse plant uses its death smell to attract flesh-eating bugs such as beetles and flies that will carry its pollen to cross pollinate other corpse flowers.

So its purpose is simply to perpetuate itself apparently. Thanks you, Mother Nature. One bloomed in the Bronx last August, but the plant is native to the rain forests of Sumatra and I suppose it makes sense in the ecological framework of western Indonesia. As for the D.C. transplant, I'm not certain.

This particular plant, which blossomed for the first time, is said to have grown from 4 feet tall to 8 feet tall just in the time it was put on display in the greenhouse -- less than a week-and-a-half. It reeked of death for a couple of days then withered.

The folks at the Botanical Garden said this particular plant was the first corpse flower to bloom in Washington, D.C., since 2007. So for eight years -- from 2008 to 2016 -- there was no call to line up for the smell of death in the nation's capital. This year -- bloom!

Hmmm. Maybe I was wrong about the plant's purpose. Maybe it's trying to tell us something. Let's see " what blooms big and garish without warning for no purpose other than to promote itself, attracts a crowd, appeals to flesh-eating bugs, stinks to hell for a brief period and then withers and goes away for a long time?

Maybe they'll have a clue at the White House.

Related Topic(s): Congress; Corpse Flower; Death; Insects Bugs; Nature; New York; Plants; Rain Forest; White House, Add Tags
Add to My Group(s)
Go To Commenting
The views expressed herein are the sole responsibility of the author and do not necessarily reflect those of this website or its editors.