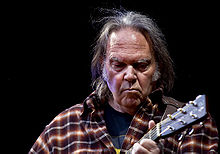 Duluth, Minnesota (OpEdNews) October 12, 2020: From Neil Young's 2012 memoir Waging Heavy Peace: A Hippie Dream (Penguin Group), I gather that as part of his hippie dream life he imagined that he and his musical bands were waging heavy peace as they rolled off their musical tracks. But then they skipped the rails, figuratively speaking, and started to fail. Oh my. Oh my. But think of how close they came to waging heavy peace in their hippie dream life.

Apart from whatever autobiographical events that Neil Young (born in 1945) may be referring to, his oft-repeated refrain "I wanna walk like a giant" also happens to capture that longing many Americans today now have to return to the normal world before the Covid-19 pandemic. In terms of Neil Young's lyrics, we skipped the rails when Covid-19 emerged and we started to fail - falling sick with Covid-19 and many dying from it - more than 200,000 Americans and more than one millions persons worldwide, thus far - and the pandemic is not over yet. Consequently, we now feel like a leaf floating in a stream - but we wanna walk like giants on the land, as we did in the pre-pandemic world.

Now, before the Covid-19 pandemic emerged earlier in 2020, Pope Francis (born in 1936) walked like a giant on the world stage as he crooned his tunes of praise and blame - in his renditions of the oral tradition of praise poetry - and captured headlines. However, as he was preparing his new social encyclical, the Covid-19 pandemic emerged in Italy and elsewhere around the world. So he skillfully interweaves references to it in his new 43,000-word social encyclical. Because I have likened the pope's earlier tunes of praise and blame to the oral tradition of praise poetry, perhaps I should liken his lengthy new social encyclical to an oral epic.

Pope Francis has had enough of our walking like giants on the land. Consequently, he does not want us to return to the pre-pandemic world. Rather, he wishes to see a better world somehow emerge from the covid-19 pandemic.

As everybody knows, Pope Francis, the first Jesuit people, took the name Francis to honor the medieval Italian troubadour hippie of his day St. Francis of Assisi (1182-1226) - a cultural ancestor of Neil Young. Among other things, St. Francis is known for his song/poem "Canticle of Brother Sun."

But the more proximate prompt for Pope Francis' new social encyclical was his meeting with the Grand Imam Ahmad Al-Tayyeb in Abu Dhabi in early February 2019 (paragraphs 5, 29, 136, 192, and 285). The joint document the two of them issued on that occasion emphasized the dignity of the human person - which was also emphasized in the 1948 Declaration of Human Rights.

Chapter One: Dark Clouds Over a Closed World (paragraphs 9-55);

Related Topic(s): Corona Virus Coronavirus Covid-19; Crusades; Dialogue; Peace; Peace; People; People; Politics; Religion; Rights; (more...) Worldwide, Add Tags  (less...)
Add to My Group(s)
Go To Commenting
The views expressed herein are the sole responsibility of the author and do not necessarily reflect those of this website or its editors.