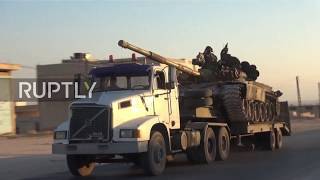 Yesterday, Russian planes made some 23 strikes against al Qaeda strongholds in Idlib Province, Syria. This could be the initial operation liberating Syrian peoples long held hostage by the western backed mercenary proxy jihadists.

The Russian strike occurred hours after President Trump tweeted, "President Bashar al Assad must not recklessly attack Idlib Province. The Russian's and the Iranian's would be making a grave humanitarian mistake to take part in this potential human tragedy". This from the man who recklessly sent missiles into Syria last April over an alleged chemical attack blamed on Assad killing his own people. A subsequent independent investigation revealed no such attack occurred as no evidence of any chemical weapons were discovered in the area of the alleged attack. Well so much for the "Donald's" humanitarianism.

The Syrian Arab Army (SAA), having recently liberated the last remaining remnants of these jihadists around Damascus has been massing around Idlib preparing for the final assault.

For weeks the Russian's have revealed publically these proxy jihadists in Idlib have been supplied with chemical weapons which they intend to use then blame the Assad regime for the attack prompting the US to retaliate firing missiles against Syrian government installations. Let's remember Assad gave up all his chemical weapons in 2013. And besides why would he target the Syrian people if he was winning the war and the areas liberated by his SAA have hundreds of thousands people returning?

On Friday the presidents from Russia, and Turkey along with the Iranian's are to meet in Tehran presumably to discuss the final planning for the assault on Idlib.

Meanwhile in the last two weeks Trump's national security advisor John Bolton weighed in, "if the Syrian regime uses chemical weapons we will respond very strongly". Over at the State Department we get "Washington would respond to any chemical attack by Damascus".

Russia has sent some 20 plus missile carrying warships from the Black Sea into the Mediterranean off the coast of Syria. It's hard to imagine them being there just for some war games.

With the US, Britain and France ready to send missiles attacking Syrian government installations if chemical weapons are allegedly used in Idlib blaming Assad for the attack the situation could escalate between the US and Russia whereby any de-confliction agreement between the two militaries could be in serious jeopardy.

This is precarious as it gets.

Retired. The author of "DECEIT AND EXCESS IN AMERICA, HOW THE MONEYED INTERESTS HAVE STOLEN AMERICA AND HOW WE CAN GET IT BACK", Authorhouse, 2009
Related Topic(s): Liberation; Syria; Syrian Arab Army; Syrian Situation, Add Tags
Add to My Group(s)
Go To Commenting
The views expressed herein are the sole responsibility of the author and do not necessarily reflect those of this website or its editors.