The American media landscape in this time of U.S. imperial decline is increasingly detached from reality. We've shifted from the War on Terror to a new cold war of great-power competition, where Russia, China, and their allies are constantly vilified. In this paradigm, both the right and the left have become frequent promoters of the propaganda that Washington's regime change consent factory creates, though these two sides do their jobs from different angles.

Currently, the Trump White House is coordinating a right-wing media effort to blame China for Covid-19, which is a narrative that liberals and "progressives" are for now not typically trying to proliferate. But from their own angle, these left-leaning media figures have long been laying the groundwork for this trend of misinformation about China.

In earlier parts of America's descent into late-stage imperial madness, there was more room in mainstream discourse for dissent. Democracy Now's Amy Goodman covered the atrocities of the 1999 NATO bombing campaign against Yugoslavia, and in 2006 Goodman wrote a book titled Static: Government Liars, Media Cheerleaders, and the People Who Fight Back. The book observed how "Bush had used deception and disinformation to get us into a war"Remarkable testimonials, compelling narratives-and all of them fake. These stories, which aired on American news programs, were each produced by the government. The 'reporters' were public relations professionals hired by the government."

Despite having noted this trick that war propaganda operatives can use to get their messages into the media, in July of 2019 Goodman featured a similar type of dishonest "expert" on her program, an "expert" who proliferates narratives as false as the Iraq WMD claim. His name was Adrian Zenz, a far-right evangelical who's a senior fellow at the U.S. government-created Victims of Communism Memorial Foundation.

It's worth mentioning that the Victims of Communism Memorial Foundation is an outgrowth of the National Captive Nations Committee, whose Ukrainian nationalist founder Lev Dobriansky also created the World Anti-Communist League. Journalist Joe Conason has described the League as a "haven for neo-Nazis, fascists, and anti-Semitic extremists from two dozen countries." The Victims of Communism Memorial Foundation itself continues to propagate the "double genocide" theory, which rewrites the Holocaust in order to portray the Soviet Union as an equivalent to the Nazis.

Aside from how it's incredible that Goodman would even associate Democracy Now with a man who's connected to this network of hate groups and Holocaust revisionists, the claims that Zenz made on the program lacked any core evidence. Zens said that China is "putting possibly a million or more of the Uyghurs and other Turkic minorities into so-called re-education camps," and that this represents "the largest incarceration of a particular ethnic minority since the Holocaust."

Zenz has based his "million or more" claim off of a report from Istiqlal TV, a Uyghur separatist television network that's often hosted guests with links to Al Qaeda and other extremist groups. Istiqlal TV claimed in 2018 that Chinese authorities had "leaked" a figure of several hundred thousand Uyghur detainees. Zenz used this to speculate, based on no evidence, that over a million Uighurs were potentially being held.

Democracy Now's participation in the anti-Chinese media trend didn't end there. In January of this year, Goodman interviewed Ai Weiwei, the former Chinese resident who's frequently used his public platform to vilify China. Throughout his career, Weiwei has collaborated with the notorious neoconservative think tank the Council on Foreign Relations, which gives some indication of which geopolitical narratives he aims to advance.

On the program, Weiwei made the wild claim that China has detained "million, millions of Uyghurs." Weiwei also called the anti-Chinese Hong Kong protests "a very beautiful revolution." He said this after Hong Kong's communities had reportedly come to live in fear of violence from the protesters, after some protesters had lit a man on fire and killed an elderly man with a brick, and after the protests had been endorsed by Ukrainian neo-Nazis.

The fact that Goodman hasn't made any effort to emphasize the U.S. backing behind religious extremism in Xinjiang, or to expose the U.S. role in the Hong Kong protests, shows which side of the story Democracy Now has sought to tell when it comes to China. 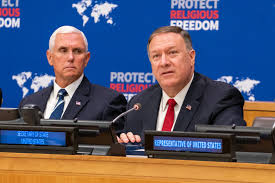 In August 2018, The Intercept's Mehdi Hasan published a story which claimed the U.N. had said that one million Uyghurs were being detained by China. It joined many other media outlets in reporting this falsehood, which was started by a Reuters article titled: "U.N. says it has credible reports that China holds million Uighurs in secret camps."

Related Topic(s): China And Hong Kong; Liberal Media; Propaganda, Add Tags
Add to My Group(s)
Go To Commenting
The views expressed herein are the sole responsibility of the author and do not necessarily reflect those of this website or its editors.