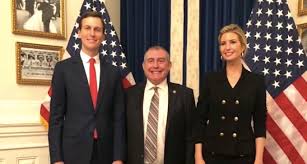 Lev Parnas recently told Rachel Maddow that he's more afraid of Attorney General Bill Barr than he is of the mobbed-up foreign oligarchs he has betrayed. Barr, after all, can weaponize our prisons to punish Parnas.

"Am I scared?" he said. "Yes, because I think I'm more scared of our own Justice Department than these criminals right now."

An attorney general willing to bend or even break the law -- and certainly willing to conceal crimes and lie to the American people -- can be a corrupt president's last line of defense.

When a whistleblower in the White House reported that Trump was bribing and extorting Ukrainian President Volodymyr Zelensky, that report first went to Intelligence Community Inspector General Michael Atkinson, who thought it was evidence Trump had committed a serious crime. Atkinson deemed it an "urgent concern" and then gave it to Director of National Intelligence Joseph Maguire. Under the Intelligence Community Whistleblower Protection Act, Maguire was supposed to then hand it over to congressional intelligence committees. Instead, he made a pit-stop at the Justice Department's Office of Legal Counsel, which handed it over to Bill Barr's office.

Which is where it died, until ICIG Atkinson reached out to the House Intelligence Committee to let them know about Barr's cover-up.

"In the course of my official duties, I have received information from multiple U.S. Government officials that the President of the United States is using the power of his office to solicit interference from a foreign country in the 2020 U.S. election. This interference includes, among other things, pressuring a foreign country to investigate one of the President's main domestic political rivals.

"The President's personal lawyer, Mr. Rudolph Giuliani, is a central figure in this effort.

"Attorney General Barr appears to be involved as well."

The language the whistleblower uses calls to mind the 1972 press reports of Nixon's Attorney General John Mitchell hiring former FBI Agent Stephen King to physically assault and mollify Mitchell's own wife to keep her quiet about his and Nixon's crimes. (King, now 78, was richly rewarded for his lifetime of service to the GOP in a breathtaking way by Donald Trump; more about that in a minute.)

Like Mitchell before him, Barr has long experience covering up the crimes of a corrupt Republican president. We know, because Barr has done it before.

How Barr Earned the Moniker "Coverup-General"

The week of Christmas, 1992, George H.W. Bush was on his way out of office. Bill Clinton had won the White House the month before, and in a few weeks would be sworn in as president.

Related Topic(s): Bill Barr; Bush; Conspiracy; Crime; Investigation; Judiciary; Lev Parnas; Pardon; President; Prosecution; (more...) Whistleblower, Add Tags  (less...)
Add to My Group(s)
Go To Commenting
The views expressed herein are the sole responsibility of the author and do not necessarily reflect those of this website or its editors.