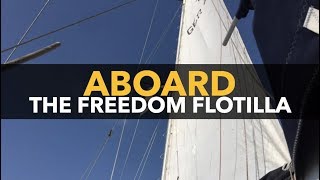 Below is a copy of the letter those aboard the Gaza Freedom Flotilla sent to Secretary of State Mike Pampeo after a 70-day trip from Scandinavia...

The 2018 Gaza Freedom Flotilla after a 70-day trip from Scandinavia stopping in ports in Norway, Sweden, Denmark, Germany, the United Kingdom, France, Spain and Italy, departed Sicily and is now heading across the Mediterranean to Gaza to challenge the illegal Israeli blockade of Gaza.

The representative of the United States, U.S. Navy survivor of the 1967 Israeli attack on the USS Liberty ship, Joe Meadors, is on board the ship Al Awda with a number of other prominent human rights advocates from around the world.

The flotilla carries 116 boxes of urgently needed medical supplies, primarily sterile gauze and sutures, to be gifted to Gaza's over-stretched health services due to the execution of 140 Palestinians in Gaza and severe injury to over 16,000 Palestinians by the Israeli Occupation Forces in the past two months during the Friday Great Return Marches.

The three boats of the flotilla will be gifted to Gaza's fishers who are now having to fish within three miles of the shore due to Israel's lethal enforcement of a Israeli declared fishing zone in Gaza waters. One boat is a fishing trawler and two are sailboats.

Like previous similar humanitarian missions, this flotilla with unarmed, civilian human rights activists poses no threat to Israel. Israel's own actions toward Palestinians is what causes Israel to feel threatened.

Ann Wright is a 29-year US Army/Army Reserves veteran, a retired United States Army colonel and retired U.S. State Department official, known for her outspoken opposition to the Iraq War. She received the State Department Award for Heroism in 1997, after helping to evacuate several thousand (more...)
Related Topic(s): Freedom Flotilla; Gaza Freedom Flotilla; Israel; Letters; Secretary Of State Mike Pompeo, Add Tags
Add to My Group(s)
Go To Commenting
The views expressed herein are the sole responsibility of the author and do not necessarily reflect those of this website or its editors.