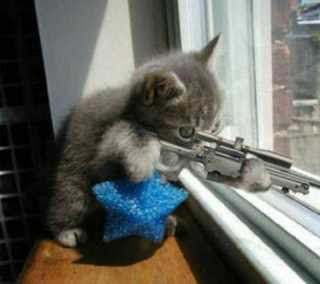 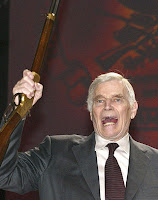 MONROE, NY - "Fears that a liberal presidential administration will impose more restrictions on gun ownership have triggered [no pun intended, I'm sure] a frenzy of gun buying at local suppliers, who are struggling to restock their shelves with firearms and ammunition."

Well now! Isn't it heartening to know that in these hideously desperate economic times, there is still an industry that is recession proof? Thank heavens for these little blessings!

QUESTION: Have you ever had a loved one shot and killed in an act of mindless gun violence?

ANSWER: If you haven't, you will. Count on it. Your elected representatives will see to that.

As Americans arm themselves to the teeth, the law of averages will eventually forbid such an unspeakable tragedy from not touching the lives of almost everyone. It has already happened to my family - twice. Two female cousins of mine - who never even had the joy of meeting one another - (one on my mother's side, the other on my father's) both died as the result of being murdered by men who were stalking them. Don't for a moment reflect on the passive tranquility of your life and delude yourself into thinking, "It can't happen here". It can. It will. Whether child, parent, sibling, cousin or friend; gun violence will touch your seemingly untouchable lives eventually. Count on it.

I was never a great admirer of the governing style of Bill Clinton. As I mentioned in last week's posting,"....no Democrat since Johnson (Andrew, not Lyndon) was a more bitter disappointment than William Jefferson Clinton." But while Bubbah did get a lot wrong, we must be fair to the poor old guy by conceding that he did get a lot right. One of the areas in which he was very, VERY right was when his administration initiated a ban on assault rifles. It was George W. Bush who stupidly allowed that ban to expire.

I don't know the name of the person who designed the first rapid-fire weapon, but whatever his name was (and he had to be a man - women just aren't that cruel) he only had one purpose in mind: to kill as many human beings as quickly and as efficiently as possible. The corrupt Republican (and more than a few Democratic) politicians who are bought and paid for by the National Rifle Association have the blood of innocents on their greedy little hands. The people who manufacture these weapons are making a killing - figuratively and literally. And nowhere has the pungent aroma of their profit been more apparent in recent years than on the southern side of the Mexican/American border. Ninety percent of the guns that are being used in the atrocities committed are being purchased - legally - on the northern side of the border.

And now the violence between Mexico's drug cartels is spilling over into the good ol' U.S. of A. Regular Americans are becoming the hapless victims of this mindless narco-insanity. And why not? It is America's mind-numbingly stupid gun laws that are pouring fuel in the inferno. Maybe that's poetic justice - who knows? But it is nonetheless exasperating in the heat of what can only be described as an international crisis, to hear these foolish American extremists declare that Mexico's problem should not interfere with our Second Amendment rights. Right.

From a Pulitzer Prize-deserving article by Guy Lawson in the March 19 issue of Rolling Stone:

"'Mexico is on the edge of the abyss' retired U.S. general and former drug czar Barry McCaffery wrote in a strategic assessment at the end of last year. Michael Hayden, the outgoing head of the CIA, said in January that the threat of a narco state in Mexico is one of the gravest dangers to American security, on a par with a nuclear-armed Iran. A recent report by the U.S. Joint Forces Command likens instability in Mexico to the risk of a failed state in Pakistan, warning that a 'rapid and sudden collapse' could occur in the coming years. 'Any descent by Mexico into chaos,' the report concludes, 'would demand an American response based on the serious implications for homeland security alone'"

In other words: probable war with Mexico in the next decade. Aren'cha excited? I know I am!