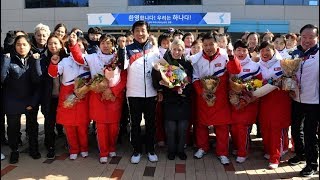 Yes, Russia is barred from participating officially in the 2018 Winter Games, which began this weekend, because it tried to steal the 2014 Games in Sochi by pumping its athletes full of steroids. But Russians who did not cheat will compete, albeit without the flag or anthem of Mother Russia.

More significantly, with the Games taking place in South Korea, North Korean athletes are participating. Better yet, athletes from North and South Korea marched in together under one symbolic flag and the women's hockey team includes members from both nations. There were no 38th Parallel issues for people who have been sharing a divided peninsula since the end of World War II and for nearly 65 years have endured a tense truce that halted the Korean War. And. thankfully, there was no tweeting about whose nuclear button was bigger and badder.

A lot of so-called experts are calling the Olympic dance by the two Koreas mere window dressing or a charm offensive by North Korean leader Kim Jong-Un. Somehow, charming is not a word that comes to mind when I think of Kim.

But the overture to come "take part" was made by South Korean President, Moon Jae-In, who pledged to work for better relationships with fellow Koreans in the north when he ran for president last year. One could consider this an example of a leader making good on his promise -- and a politically risky one at that -- rather than looking for excuses or people to blame for not following through.

Donald Trump sent Mike Pence, his tight-lipped, see-no-evil shadow, to represent the United States at the opening ceremonies. There was no acknowledgement of President Moon's diplomatic initiative, but again, at least no saber-rattling on Twitter.

Supposedly -- again, this is the experts talking -- KIm has gone along with this brief softening of tensions and shared Olympic spirit in the hopes of having economic and diplomatic sanctions on North Korea reduced. OK, so what? Who can blame him for that?

But who can blame Moon for thinking that maybe even a small thing like a shared women's hockey team team is better for all Koreans than constant talk about missiles and nuclear weapons? Diplomacy takes many forms and, yes, sometimes it is imperative to be forceful and consistent when dealing with a difficult foe. It is also true that sometimes the simplest gesture can have unexpected results.

When nuclear warfare is apparently being discussed seriously and frequently in the Oval Office it is reassuring to know that the heads of the two nations that live face-to-face with the threat of war every day can agree to break bread and march together and, who knows, maybe agree to stay in touch when the skating and skiing is done.

I am under no delusion that the Orange Dotard (a name charmingly assigned by Kim) understands diplomacy, the perils of nuclear war or the importance of allowing subtle forces to influence the course of events. It is all bombast and buffoonery all the time. Just look back at some recent news stories emanating from the White House:

The Chinese military strategist and philosopher also wrote: "The greatest victory is that which requires no battle."

And: "The supreme art of war is to subdue the enemy without fighting.'"

Like maybe starting with South and North Korean women playing a little hockey together against women from other nations. Change the dynamics.

Trump and Kim are always ready and eager to hurl insults and threats. And maybe missiles. South Korea's President Moon is trying to ease the tension and maybe open the door to more civilized dialogue. In the spirit of the Olympics, it's an effort well worth making and supporting.

Meanwhile, maybe one of his aides -- a general, perhaps -- can read Sun Tzu to you know who.