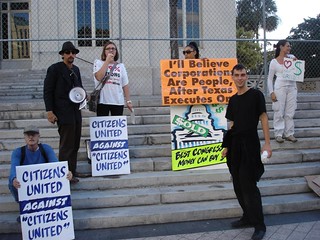 We are daily regaled with pleas for donations to the cause of passing a constitutional amendment to repeal the effects of Citizens United and Buckley v. Valeo. They are popular and appear to have raised tens of millions of dollars. But let us consider what is involved.

Choosing a new government in a democracy starts from picking candidates through electioneering and finally to the vote. As such all parts of the choice are governmental actions when the state is providing the means for the choice, and must be available equally to all members of the electorate and persons who are participants in the election process. It is very clear that most people cannot afford to spend millions or billions of dollars in propagating their speech in these processes. In order to grant reasonably fair and equal access to this governmental process, it would be reasonable for the government to limit the amounts that any one person, alone or in groups, can contribute to the success of election of candidates and, where they can be considered, initiatives referendums and recalls. This could be required under the equal protection clause of the Fourteenth Amendment.

In Citizens United, v. Federal Election Commission (2010) the ruling of the 5 to 4 majority of the court effectively freed corporations and unions to spend money both on "electioneering communications" and to directly advocate for the election or defeat of candidates (although not to contribute directly to candidates or political parties).

While the Supreme Court had also rejected campaign limitations based upon "governmental interest in equalizing the relative ability of individuals and groups to influence the outcome of elections ..." by the federal act's expenditure ceiling Buckley v. Valeo (1976); It did not consider whether the such limitations could be compelled by the Fourteenth Amendment giving all persons participating in the electoral process equal rights to participate.

In response to these and related cases a great cry has arisen to raise money to pass a constitutional amendment to amend the First Amendment's freedoms of Speech and the Press so that it will not obstruct these laws. Heavens knows what such amendment proposal might finally emerge out of the amendment processes, and, if passed, what it might do by way of collateral damage to the First Amendment. But, as we can see during these election times, it is a great way to raise money and support those who make money off promoting causes and just happen to be diverting some from candidates.

Rather than suck money out of some progressive's campaigns as some very aggressive groups do daily in promoting a campaign to end Citizens United by a constitutional amendment, it would seem far wiser for progressives to withhold their money and concentrate on electing progressive representatives at the State and Federal level to pass new campaign finance laws that meet the Supreme Court's current requirements, and it can be done.

Actions that allow unequal treatment of persons using governmental services so that some can only contribute small amounts while others can contribute millions and even billions to electioneering violates the standard of equal protection giving those with larger contributions an inherently unequal voice in the electoral processes. All laws on the State level that seek to limit contributions should cite this as one of the reasons for their passage. They are seeking to comply with their equal protection requirements, and provide equal access of all persons to the electioneering processes. Congress can cite Section 5 of the Fourteenth Amendment as its authority for enforcement of such equality. The Buckley v. Valeo did not address equal protections under the Fourteenth Amendment.

Because the Fourteenth Amendment was passed well after the First it should take precedence over all prior portions of the Constitution., and it must be conceded, no matter how important the rhetoric may seem to be for enforcing the First Amendment, it was modified by the Fourteenth Amendment which must be assumed to have considered all prior portions of the Constitution before its passage.