If we stand together against powerful special interests we can eliminate poverty, increase life expectancy and tackle climate change 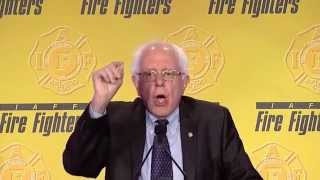 Bernie Sanders: Religion of Billionaire Class Is Greed
(Image by YouTube, Channel: LR)   Details   DMCA
This is a pivotal moment in world history. With the explosion in advanced technology and the breakthroughs this has brought, we now have the capability to substantially increase global wealth fairly. The means are at our disposal to eliminate poverty, increase life expectancy and create an inexpensive and non-polluting global energy system.

Related Topic(s): Billionaires; Democracy; Economy; Greed; Inequality; Powers That Be, Add Tags
Add to My Group(s)
Go To Commenting
The views expressed herein are the sole responsibility of the author and do not necessarily reflect those of this website or its editors.