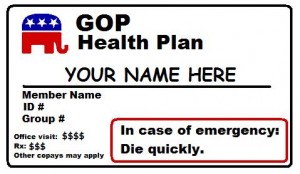 What is the proper response to the question: "what should happen to a 30-year-old man with cancer who can't afford health insurance?" Wolf Blitzer asked that question to presidential hopeful Ron Paul at the Republican debate in Tampa, then asked if society should just let him die. The shouts in the affirmative of "yeah! absolutely!" yelled loudly, proudly, and without second thought by the assembled audience were shocking. The rabble's response rang through the room as the loudest response during the often raucous 90-minute debate.

Ron Paul's bland answer about inflation and the devaluation of the dollar is inconsequential. What is remarkable is that CNN's Wolf Blitzer never batted a pale eyelash at the mob's death cry.

Why CNN was hosting such a partisan event is a separate, disturbing topic in itself. Anything for ratings, it seems. For a network that bills itself as "no bias, no bull," that has no ethical issue or conflict linking its credibility to the traveling circus in which the attendees call for the death of poor people. ... But I digress . . . .

Not since the days of the Roman Coliseum have we witnessed a crowd of unfeeling sadists cheer for the death of the innocent. This is the same philosophy expressed by perennial Neocon favorite, the Right Reverend Pastor John Hagee, in his infamous sermon that poor people should STARVE! This from a man who looks like he could personally cause a famine.  How Jesus-like these Christians are.

Where is the compassion in these conservatives? What happened to the concept of America as a shining beacon on the hill? A nation of caring citizens who recognize the dignity and humanity in every individual, regardless of socio-economic status? Of the philosophy that we take care of our poor, our hungry, our sick . . . isn't that what George W. Bush claimed separates us from terrorist (aka Muslim) nations -- that when people hurt in this country, we take care of them?  Wasn't that a central tenant of the founders of our Democratic Republic?

Not if the Teabaggers get their way. The poor, the homeless, the starving children can just go die. Was it eight years of bombing the bejeezus out of innocent Muslims that made us so hard? The cheer-leading of the death of the innocents, the torture at GITMO, the carnage of children blasted at us on the corporate media? Was it the constant fear-mongering that made us draw inward, adopting the paranoid position of "I've got mine -- you keep away!?"  Was it the rise of the mega corporations to the point of legal person-hood, the Blackwater-style privatizing of our military and other government outlets that subtly infuse society with utilitarian disregard for sympathy and compassion for our fellow man?

What has turned some of us so mean and hateful?

And does anybody find it ironic that the same Teabaggers who claimed outrageously that Barak Obama's health-care plan would create "death panels" which would mete out health care to a select few while allowing others to die, these are now the same freaks who applaud and cheer the idea that the uninsured should just . . . die?  Anybody see the hypocrisy there?  Not over at the non-biased CNN, apparently.

Not happy with the ratings boost they milked last night, CNN continued the coverage into the next morning, with candidate interviews, and polls asking if Ron Paul "went too far" with his statements about 9-11, or if Rick Perry should've forced young women in Texas to receive the HPV virus vaccination, or calling for votes on "who won the debate last night?"

We know the answer to that one: The Big Corporations that have purchased each candidate, each media outlet, and sold the American people down the river while inculcating a culture of cretins who would rather see their fellow man die of cancer than receive affordable health insurance.

Kathy never expected a career in radio as a talk show producer. Born and raised in Atlanta, Georgia, Kathy was completing her nursing degree when in 2001 - in an emergency - she was asked to fill in as the producer of Mike's program. Within a few (more...)
Related Topic(s): Citizens; Republican; Teabaggers, Add Tags
Add to My Group(s)
Go To Commenting
The views expressed herein are the sole responsibility of the author and do not necessarily reflect those of this website or its editors.