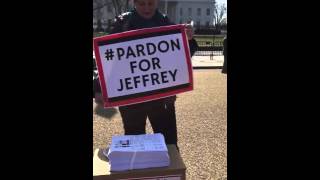 My beloved husband Jeffrey was persecuted and wrongly convicted. The government has no shame in destroying an innocent man's life for almost two decades because he stood up for his constitutional rights and would not plead guilty to a crime he did not commit. Jeffrey has suffered tremendously in his fight for innocence and the truth to prevail. Please consider making a donation to the Sterling Family Fund to help assist with the overwhelming financial devastation inflicted by the government. Your financial contribution would aid in essential preparations for Jeffrey's release and allow him to focus on the beginnings of rebuilding his life.

Respectfully and with much gratitude,
Holly Sterling

Federal Bureau of Prisons (BOP) officials last week gave CIA whistleblower Jeffrey Sterling a parting shot by adding a month of prison time to his sentence. Sterling was due to be released from the low-security prison at Englewood, Colorado, on December 14. He now won't leave until January 16, 2018. The BOP says that there is nothing untoward about the move. It's just that there aren't enough open beds in a St. Louis halfway house to let him go. That contention is disingenuous at best.

Sterling is a former CIA officer who was sentenced to three-and-a-half years in prison on a multitude of Espionage Act convictions, despite the fact that the government never proved that he actually had had anything to do with espionage. The convictions rested on a book written by former New York Times journalist James Risen, one chapter of which discussed a botched CIA operation to damage the Iranian nuclear program with faulty technical plans.

Risen's book was published soon after Sterling filed a racial discrimination suit against the CIA, arguing that he was denied an overseas assignment because, as his supervisor told him at the time, he would attract attention "as a big black guy speaking Farsi." Sterling's suit was dismissed on national security grounds ("We'd love to defend ourselves, but to do that we'd have to release classified information") by the hanging judge who would later oversee Sterling's conviction and send him to prison.

After the book was published, the CIA argued that Sterling was Risen's source, claiming that Sterling was seeking revenge against the Agency for having his suit dismissed. Prosecutors pointed to metadata indicating that Sterling and Risen had had a handful of phone conversations over the course of 18 months, and that Sterling was probably giving Risen classified information. That's it. No proof. There were no recordings, no emails, no witnesses, no in-person meetings, no nothing. Just the CIA telling Sterling's jury, "Take our word for it."

Sterling left for prison at Colorado's FCI Englewood in mid-2015. The BOP has a regulation that prisoners will be assigned to prisons within 500 miles of their homes. It's supposed to be an effort to keep families intact. But Sterling was sent to a prison nearly 900 miles from home. The BOP said -- again, disingenuously -- that it was a bed space issue.

The BOP set out from the very beginning of Sterling's sentence to make it as difficult as possible. A year ago, Sterling suffered a heart attack in prison that went undiagnosed and then untreated until activists petitioned Colorado Democratic senator Michael Bennett to inquire about his health. Sterling was denied medication until further activism forced some action. In April, he was sent to solitary confinement for several days for "standing too closely" to a corrections officer, an unprovoked outrage that was later dismissed by more senior prison officials.

Sterling was eligible to be released from prison as early as next month. He asked repeatedly why he had been given no official release date, despite the fact that the date is supposed to be calculated a year before the latest possible release date (that is, a release date with no good behavior time calculated into it.) After much hemming, hawing, and gnashing of teeth, the BOP told him that no date would be forthcoming until he met with a delegation from the federal probation office to discuss the terms of his release, an unusual stipulation that almost no other prisoners must go through.

(I can tell you from first-hand experience that this is highly unusual. The BOP and the Marshals are completely separate federal entities. One does not need the other to give a prisoner his release date, which is calculated solely by the BOP at its calculations center in Texas. The federal probation office is a part of the Marshals Service. There is no reason whatsoever for this meeting to have taken place in person. For every other federal prisoner, including me, all of the necessary information was conveyed via email through the prisoner's case manager. But the feds decided to give Sterling special treatment.)

When Sterling met with the delegation, they would not commit to a release date. When they left, he still had no idea when he would be released, although his case manager intimated that the date would be December 14.

Related Topic(s): Harassment; Jeffrey Sterling; Prisoners; Probation, Add Tags
Add to My Group(s)
Go To Commenting
The views expressed herein are the sole responsibility of the author and do not necessarily reflect those of this website or its editors.