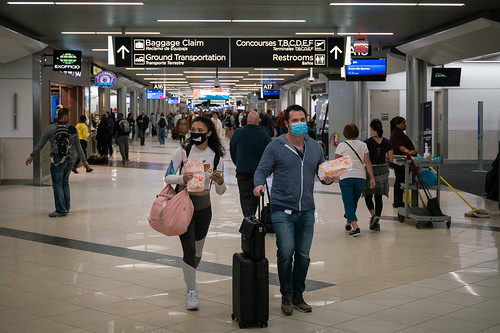 Coronavirus precautions - the problem is the healthcare system, not the virus.
(Image by chaddavis.photography)   Details   DMCA

I live in New York City, arguably Ground Zero (again!) for COVID-19, though Louisiana is catching up fast.

The problem isn't the virus per se, but our already over-stretched, previously slashed medical system, plus our complete lack of national industrial policy or capacity to ramp up. A representative of Medtronic, which makes the ventilators that we are in danger of running out of in as little as a week, says they can't ramp up production fast enough because the 15,000 parts come from 14 countries and everyone else is demanding them too (NY Times). China, of course, is one of the places where those parts come from, and they can manufacture anything, and ramp up in days.

The shortages are already beginning to cause hyper-inflation. Our local food budget just doubled in a couple of weeks, and some things, like paper staples, are still scarce, even after the initial rush to overstock died back a bit.

J.D. Alt writes about that and the de facto MMT solution in the $2 trillion(!) aid package currently being voted on in Congress, expected to pass and be signed Friday. It is a bit late, but to be fair, if Congress or Trump had tried to pass such a bill even two weeks ago, it would have been rejected as alarmist over-reach. Not so much now.

Yesterday, 3.2 million Americans filed for unemployment - a number that is surely short of reality, since it undercounts gig and PT workers who have a harder time proving they were working, and also because several high claim states' systems couldn't handle the load and crashed. Any state that does not update the Dept. of Labor is counted as zero for the week. Even with the undercount, the filings represent 4X the previous record for the last 50 years when records started being kept.

It is no wonder we are running short of everything and prices are sky-rocketing for certain in-demand items.

According to this frequently updated NYC set of charts: https://projects.thecity.nyc/2020_03_covid-19-tracker/ there were:

There are 8.4 million people in NYC (2020), so 23,112 cases works out to 0.275% of the population, which is hardly an epidemic. It's probably 10X that in actuality who really have the disease, but feel well enough or simply don't want/can't afford to spend money on getting tested or missing what little work is still being done. The working class, which is healthcare-challenged anyway, is more likely to still be working, delivering vital food, picking up the garbage, delivering the mail, etc. But if so, that means people are getting the CV, getting better on their own, and we are building up herd immunity faster than predicted. Gov. Coumo says our infection rate is down to doubling every 4.7 days, from every 2 days. Still too fast, but it may be that herd immunity, plus the virus' preference for a limited population of elderly, already sick, people, is slowing down the spread, plus we are starting to get some warmer days, which seems to hold back the infection rate. The draconian measures - yesterday, basketball hoops were removed from parks so kids wouldn't play in groups - may flatten the curve a few days, maybe a week or two at most, which might give our creaky healthcare system time to catch up; the massive Javits Center is being fitted for 1,000 beds, and could hold many more. The Governor says we may need as many as 140,000 new beds, but this is a worst case scenario. Emptied dorm rooms and hotels are being fitted for 100s more beds, and newly recruited doctors are being hired and housed in fancy but empty hotels too - some pre-graduated from NYU, or brought back from retirement. The cost of this would bankrupt the NYC hospitals, if not for the relief bill currently in Congress. It may not be enough, and Cuomo is complaining that New York state is getting only 1% of the funds, despite having 1/3 of the nation's cases.