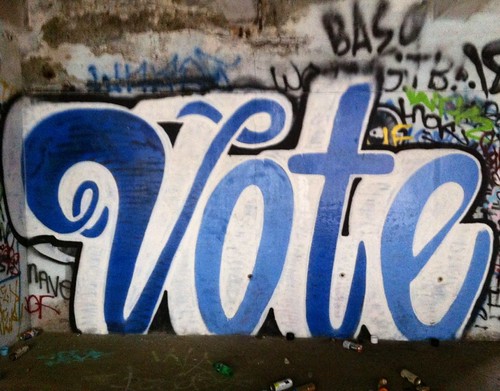 "If voting made any difference, they wouldn't let us do it."Mark Twain

"The majority of voters in this country ARE progressives."

With this strong and devastating lead-in, moderator, activist, and master photographer Joel Simpson began his panel on "Election Integrity: Publicly Verified Elections and Informed Public Are Key to De-Corrupting Our Democracy!"

The panel was part of the first session of this year's Left Forum, held at Long Island University in Brooklyn June 28-30.

We do have socialism in this country actually, said Simpson, for the rich. The structure is there; we just have to make it work democratically.

The first panelist to speak was a familiar name, John Roberts Brakey, the nonstop activist and advocate for EI who travels the country insisting on the priority of TRANSPARENCY in our elections, best provided by a variety of optical scanner, one that produces digital images as well as paper ballots. The images can be uploaded to the Internet for all of us to recount and also printed up and posted precinct by precinct. Audits can be performed via the images or hand-counting paper ballots, an ideal system according to this dedicated expert and many other EI advocates. A famous example of successful deployment of hand-counted paper ballots, prior to introduction of the digital ballots scanner, was the months-long recount of the 2008 senatorial election in Minnesota, where a most meticulous hand count of all votes, a Gold Standard of this process, put Al Franken into Congress, beating the incumbent Republican Norm Coleman by a bit more than 300 votes out of three million cast. Today optical scanners with digital ballot images can actualize more forms of transparency.

That recount was headed up by Chris Sautter. Chris has been doing Election recounts since 1984 and actually wrote the book on recounts in use by states.

Head of the original AUDIT-AZ as well as AUDIT-USA (AUDIT stands for Americans United for Democracy Integrity & Transparency in elections) EI advocacy groups, Brakey has worked for EI since the mid-first decade of this rotten new century. Here is a link to the situation that first attracted Brakey's interest in EI: Election anomalies in the 2004 Arizona election precipitated our initial interest . With heroic colleagues, he sued the board of elections of Pima County, Arizona for blatant election corruption. Nine years later, they won a record settlement. The judge ruled that chain of custody in elections, that is, the movement of citizens' votes from one stage of the counting process to the next, must be entirely visible to the public and traceable: again, TRANSPARENCY is mandatory. For a history of the eight-year struggle, view this link Pima County Elections Remain Compromised [It is amazing--ed.] (Also, do view the film "Fatally Flawed" about this amazing persistence and victory of EI. I reviewed it for OpEdNews: http://sweetremedy.tv/electionnightmares/archives/category/marta-steele.)

The second panelist and, as mentioned above, author/activist Chris Sautter, also a political media strategist, award-winning documentary filmmaker, election attorney, and university professor, has traveled with Brakey in many of through 14 states "investigating, educating, advocating, and litigating if necessary. "It's easier to prevent election fraud than to catch it after it happened, Brakey said. "That's why we must have elections that are transparent, trackable, and publicly verified."

They're fundraising grant money now from small foundations to continue their work and have already made some progress toward their goal, which is to have staff, a media budget, and attorneys available to work in 14 swing states.

Sautter reminded some of us and informed a fine showing of less-involved people we hope to attract to EI that the panicked "progression" from punch-card voting machines to electronic systems after the Election 2000 debacle in Florida undermined opportunities for fair elections because of the lack of TRANSPARENCY among the systems--the software operating the machinery is proprietary. Vendors do their best to prevent experts from accessing it and are repeatedly embarrassed by the numerous serious flaws publicized when they do.

Related Topic(s): Election Fraud; Election Law; Election Lawsuits; Election Litigation; Election Reform Activism; Election Tampering; Elections; Forum, Add Tags
Add to My Group(s)
Go To Commenting
The views expressed herein are the sole responsibility of the author and do not necessarily reflect those of this website or its editors.