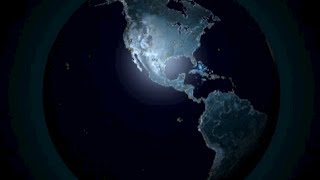 The Trump administration is getting more Orwellian by the day, but as fast as it tries to bury the truth about climate change, scientists are fighting back and showing that they will not be silenced by the climate deniers in the White House.

So while the administration tries to suppress its agencies talking about climate change, a leaked report has concluded that millions of Americans are feeling the effects of climate change right now.

"The last few years have seen record-breaking, climate-related, weather extremes, as well as the warmest years on record for the globe." So said the executive summary of a draft report by scientists from 13 federal agencies, which was leaked to the New York Times after scientists felt it could be suppressed.

The report is a major rebuttal and rebuke to the climate-denying president.

"Evidence for a changing climate abounds, from the top of the atmosphere to the depths of the oceans," the report outlined: "Thousands of studies conducted by tens of thousands of scientists around the world have documented changes in surface, atmospheric, and oceanic temperatures; melting glaciers; disappearing snow cover; shrinking sea ice; rising sea level; and an increase in atmospheric water vapor."

It is explicit that humans are to blame: "Many lines of evidence demonstrate that human activities, especially emissions of greenhouse (heat-trapping) gases, are primarily responsible for recent observed climate changes," and "Human activities are now the dominant cause of the observed changes in climate."

The report outlines how the average temperature in the U.S. has risen rapidly since 1980, and recent decades have been the warmest of the past 1,500 years.

One government scientist who worked on the report, Katharine Hayhoe, a professor of Political Science at Texas Tech University, told the Times that the conclusions were among "the most comprehensive climate science reports" to be ever written.

Whether the Trump administration will ever officially publish the report remains to be seen. The U.S. Environmental Protection Agency (EPA), currently led by Scott "Polluting Pruit" is one of the agencies that has to approve it by mid-August. It is unlikely to be published unscathed. According to the Times, "Scientists say they fear that the Trump administration could change or suppress the report."

As one commentator noted, "The leak of the report is a clear middle finger to Trump, Pruitt and their plan to derail federal climate research and policy, and it ensures the public has an opportunity to review it before they get their big, grubby mitts all over it."

Indeed, there is new evidence that the Trump administration is trying to suppress and distort the language around climate change, with the U.S. Department of Agriculture telling staff to avoid using the term "climate change" and instead use the term "weather extremes."

Emails obtained by the Guardian reveal that one senior official listed terms that should be avoided. Instead of "climate change adaption," for example, staff are asked to use "resilience to weather extremes."

"These records reveal Trump's active censorship of science in the name of his political agenda," said Meg Townsend, an attorney at the Center for Biological Diversity, which is currently suing several government agencies to force them to release information on "censoring" of climate change language.

Related Topic(s): Climate Report; Leaked White Paper; Scientists; Trump Against Climate Change, Add Tags
Add to My Group(s)
Go To Commenting
The views expressed herein are the sole responsibility of the author and do not necessarily reflect those of this website or its editors.