The author, Burt Neuborne, is one of America's top civil liberties lawyers, and questions whether federal government can contain Trump and GOP power grabs. 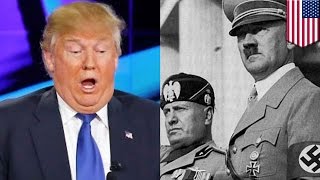 A new book by one of the nation's foremost civil liberties lawyers powerfully describes how America's constitutional checks and balances are being pushed to the brink by a president who is consciously following Adolf Hitler's extremist propaganda and policy template from the early 1930s -- when the Nazis took power in Germany.

In When at Times the Mob Is Swayed: A Citizen's Guide to Defending Our Republic, Burt Neuborne mostly focuses on how America's constitutional foundation in 2019 -- an unrepresentative Congress, the Electoral College and a right-wing Supreme Court majority -- is not positioned to withstand Trump's extreme polarization and GOP power grabs. However, its second chapter, "Why the Sudden Concern About Fixing the Brakes," extensively details Trump's mimicry of Hitler's pre-war rhetoric and strategies.

Neuborne doesn't make this comparison lightly. His 55-year career began by challenging the constitutionality of the Vietnam War in the 1960s. He became the ACLU's national legal director in the 1980s under Ronald Reagan. He was founding legal director of the Brennan Center for Justice at New York University Law School in the 1990s. He has been part of more than 200 Supreme Court cases and Holocaust reparation litigation.

"Why does an ignorant, narcissistic buffoon like Trump trigger such anxiety? Why do so many Americans feel it existentially (not just politically) important to resist our forty-fifth president?" he writes. "Partly it's just aesthetics. Trump is such a coarse and appalling man that it's hard to stomach his presence in Abraham Lincoln's house. But that's not enough to explain the intensity of my dread. LBJ was coarse. Gerald Ford and George W. Bush were dumb as rocks. Richard Nixon was an anti-Semite. Bill Clinton's mistreatment of women dishonored his office. Ronald Reagan was a dangerous ideologue. I opposed each of them when they appeared to exceed their constitutional powers. But I never felt a sense of existential dread. I never sensed that the very existence of a tolerant democracy was in play."

A younger Trump, according to his first wife's divorce filings, kept and studied a book translating and annotating Adolf Hitler's pre-World War II speeches in a locked bedside cabinet, Neuborne noted. The English edition of My New Order, published in 1941, also had analyses of the speeches' impact on his era's press and politics. "Ugly and appalling as they are, those speeches are masterpieces of demagogic manipulation," Neuborne says.

"Watching Trump work his crowds, though, I see a dangerously manipulative narcissist unleashing the demagogic spells that he learned from studying Hitler's speeches -- spells that he cannot control and that are capable of eroding the fabric of American democracy," Neuborne says. "You see, we've seen what these rhetorical techniques can do. Much of Trump's rhetoric -- as a candidate and in office -- mirrors the strategies, even the language, used by Adolf Hitler in the early 1930s to erode German democracy."

Many Americans may seize or condemn Neuborne's analysis, which has more than 20 major points of comparison. The author repeatedly says his goal is not "equating" the men -- as "it trivializes Hitler's obscene crimes to compare them to Trump's often pathetic foibles."

Indeed, the book has a larger frame: whether federal checks and balances -- Congress, the Supreme Court, the Electoral College -- can contain the havoc that Trump thrives on and the Republican Party at large has embraced. But the Trump-Hitler compilation is a stunning warning, because, as many Holocaust survivors have said, few Germans or Europeans expected what unfolded in the years after Hitler amassed power.

Here's how Neuborne introduces this section. Many recent presidents have been awful, "But then there was Donald Trump, the only president in recent American history to openly despise the twin ideals -- individual dignity and fundamental equality -- upon which the contemporary United States is built. When you confront the reality of a president like Trump, the state of both sets of brakes -- internal [constitutional] and external [public resistance] -- become hugely important because Donald Trump's political train runs on the most potent and dangerous fuel of all: a steady diet of fear, greed, loathing, lies, and envy. It's a toxic mixture that has destroyed democracies before, and can do so again.

"Give Trump credit," he continues. "He did his homework well and became the twenty-first-century master of divisive rhetoric. We're used to thinking of Hitler's Third Reich as the incomparably evil tyranny that it undoubtedly was. But Hitler didn't take power by force. He used a set of rhetorical tropes codified in Trump's bedside reading that persuaded enough Germans to welcome Hitler as a populist leader. The Nazis did not overthrow the Weimar Republic. It fell into their hands as the fruit of Hitler's satanic ability to mesmerize enough Germans to trade their birthright for a pottage of scapegoating, short-term economic gain, xenophobia, and racism. It could happen here."

Here are 20 serious points of comparison between the early Hitler and Trump.

Steven Rosenfeld  covers democracy issues for AlterNet. He is a longtime print and broadcast journalist and has reported for National Public Radio, Monitor Radio, Marketplace,  TomPaine.com  and many newspapers. (more...)
Related Topic(s): Civil Rights Violations; Democracy; Hitler; Immigration; Media; Nazis; Policies; Racism; Rights Denied; Trump Apologists; (more...) Trump Bully In Chief; Trump Cruelty; Trump Judges, Add Tags  (less...)
Add to My Group(s)
Go To Commenting
The views expressed herein are the sole responsibility of the author and do not necessarily reflect those of this website or its editors.