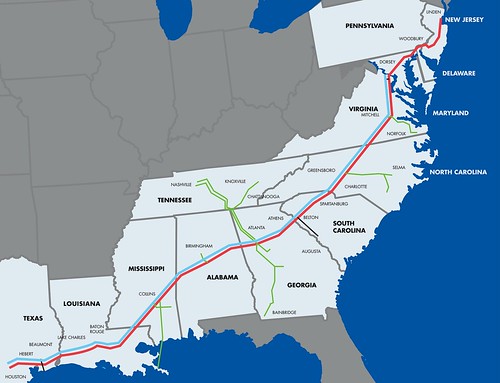 Laying Pipe in the American Mind

The "left-leaning" Guardian had a piece today alerting its readers that a cyber attack has occurred on a 550-mile stretch of US infrastructure. The victim is Colonial Pipeline, whose network of pipes stretches 5,500 miles and services 45% of the east coast's fuel supplies, including seven airports directly. According to Colonial's latest press release, it is the victim of ransomware. It has called in a "third-party cybersecurity" company to further investigate the breach. I am waiting to hear back from Colonial on what the ransom is, and who they've called in. So, speculation has to be couched and cautious.

However, we can raise a few questions, note some interesting bits and pieces of information, prime our reactionary engines. For instance, the Guardian piece alludes to last year's SolarWinds II cyber-breach, which left "tens of thousands of customers exposed [to backdoor hackers]," and, according to The Intercept, "infected more than a dozen critical infrastructure companies in the electric, oil, and manufacturing industries who were also running the software." Not noted by the Guardian or the Intercept was that breach also included government agencies who use the software -- even, ironically, the NSA. The SolarWinds hack "prompted the Biden administration to level sanctions against Russia," the Guardian tells us.

However, language is an issue: In the closing paragraph of the Guardian piece above, the journo frames it this way:

In February, a water treatment plant in Florida was hacked and a Russian attack on the Texas-based SolarWinds IT company potentially left tens of thousands of customers exposed....

This makes it seem as if the Russians just attacked SolarWinds this past February (2021), tying it, in the sentence, to the Florida infrastructure incident. Ultimately, a sub-editor missed the fact that the incidents were a year apart, or else it was intentional. This edges the story into propagandistic territory, since it's not factually true, but politically motivated. Russians are raised.