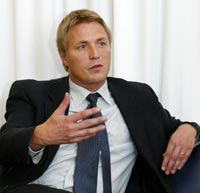 A lawyer for the accusers in the case of WikiLeaks founder Julian Assange has ties to the CIA and torture in the post-9/11 period, according to a 2009 report in Europe.

Meanwhile, a lawyer for Assange says his client is l ikely to be tortured or killed if he is extradited to Sweden and then handed over to the United States. Those concerns probably are valid, considering the background of a lawyer connected to Assange's accusers.

Thomas Bodstrom (photo above), one of the attorneys representing two women who claim Assange committed sex-related crimes, served as Sweden's minister of justice from 2000-2006, under Prime Minister Goran Persson. The 2009 report, based on a book released at that time, says Bodstrom and Persson used CIA agents to help expel two terror suspects to Egypt, where they reportedly were subjected to torture.

The story even is breaking on YouTube. A new video there   uses animation, humor, and the 2009 report to raise serious questions about the motives of the lawyers at the heart of the accusations against Assange.

Here is how the story was reported in Europe:

I live in Birmingham, Alabama, and work in higher education. I became interested in justice-related issues after experiencing gross judicial corruption in Alabama state courts. This corruption has a strong political component. The corrupt judges are (more...)
Related Topic(s): Extradition; Rendition; Torture; Wikileaks, Add Tags
Add to My Group(s)
Go To Commenting
The views expressed herein are the sole responsibility of the author and do not necessarily reflect those of this website or its editors.