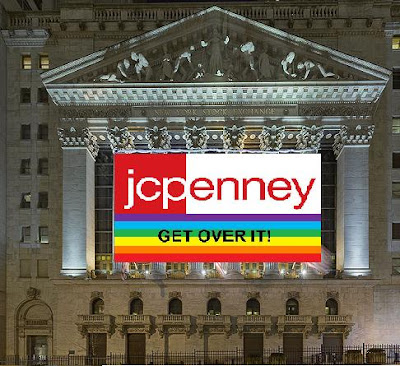 Ellen - "My haters are my motivators."

Update: One Million Moms fires back at Ellen for referring to them as "haters" and disclosing that they have only 40,000 friends on facebook.

Last Friday, JC Penney stock closed slightly lower than it's 52-week high (down .07 from $42). Of course, the market closed before the big disclosure of the day: JC Penney was keeping Ellen Degeneres as its spokesperson despite the strong request by the American Family Association and its homophobic offspring, One Million Moms to "fire" Degeneres. But it proved that Wall Street was unfazed by the OMM and  AFA threats to the retail giant.

Now, the AFA's ubiquitous fear-mongerer, Bryan Fischer, has countered that in its decision to keep Degeneres, JC Penney will encourage young women to become lesbians and thus, become more susceptible to breast cancer:

"Will America's young women be just a bit more likely to experiment with lesbianism now that JCPenney is mainstreaming it? Too any objective observer, the answer must be yes. Is this a good thing? To any objective observer, the answer must be no. Research has indicated that lesbians suffer from increased levels of depression, suicidal ideation, substance abuse, breast cancer and vaginal diseases compared to heterosexual women. Thus what JCPenney has done, by increasing, even if ever so slightly, the chances that young women will experiment with this behavior will turn out to be a tragic thing for some. JCPenney will have to share some culpability for that." - American Family Association radio host Bryan Fischer. (Via Right Wing Watch)

Twisted logic apparently runs in AFA genes, because on one of AFA's radio shows,  hosts Buster Wilson and Fred Jackson  had this to say about the controversy:

Wilson: we just don't believe that Ellen DeGeneres is wholesome, family. She is known, she made her name, by being the first real television star to come out in her homosexuality.

Jackson: You kind of mentioned it. What makes Ellen DeGeneres dangerous is that she's a nice person and, I haven't watched her program but apparently she does an interesting kind of funny program.

Ellen Degeneres is nice, therefore, she's dangerous. Makes perfect sense. The following is a list of Degeneres' "niceness put by one blogger:

Upon the announcement by J.C. Penney that it was sticking to its decision to keep Ellen as a spokesperson, OMM stepped up its campaign by stating that it would begin targeting stores individually,  going directly to stores managers. It also had this to say about a supposed "haters":

In today's culture when an individual stands up for something they believe in and someone disagrees with them then they are referred to as a hater when in reality it is OMM's opponents who are hating us. Tolerance goes both ways. Apparently, OMM must be doing something right because scripture says that we will be persecuted for our Biblical beliefs (Matthew 5:11)

Rev. Dan Vojir is has been writing/blogging on religion and politics for the better part of ten years. A former radio talk show host (Strictly Books " Talk America Radio Network) and book publisher, Dan has connected with some of the most (more...)
Related Topic(s): American Family Association; Anti-gay; Bill OReilly; Ellen DeGeneris; Facebook; Homophobia; Howard Stern; Jc Penney; One Million Moms, Add Tags
Add to My Group(s)
Go To Commenting
The views expressed herein are the sole responsibility of the author and do not necessarily reflect those of this website or its editors.