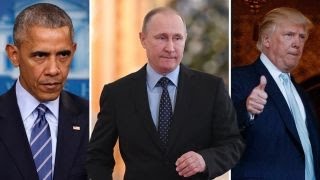 Various factors have kept long-form writing at a minimum lately, but shorter blasts on Facebook have been possible from time to time. Below is an edited selection of a few rants from a month of madness:

"The CIA said it. I believe it. That settles it." This is apparently the new progressive version of the old Bible Belt bumper sticker. Below, the Washington Post, after five days, walks back its Friday fake news scare story, which was wrong on virtually every assertion of "fact" in the original. Meanwhile, Trump hobnobs with mobsters and his business partners (a tautology, I know) to little notice, while the extremists in Congress prepare their neofeudal blitzkreig. But by all means, let's keep looking for reds under the bed while homegrown, all-American brigands set the house on fire in broad daylight.

Almost half of the nefarious IP addresses in the government's Russian hacking report are actually Tor nodes that are open to anyone to use. (Yes, Russians included. And your little brother.) Another fun fact: the Tor network was developed by the US government so its agents could hide in its giant haystack while collecting intelligence and conducting cyber-espionage. Another fun (and weird) fact: Wikileaks and other dissidents encourage whistleblowers and leakers to use Tor, despite its connection to the US military and intelligence services. So who is watching whom leak to whom and from where and why? In how many layers and on how many levels are we being gamed? The "cloud of unknowing" cultivated by spies at home and abroad leaves us all in the dark -- and that's the way the Great Gamers like it.

The Apotheosis of Economic Brutalism

After appointing yet another Goldman-Sachs man as head of the SEC (fox in charge of hen house), Trump is preparing an "unpresidented" tax "holiday" that will allow the biggest corporations to bring home billions of dollars they've been stashing off-shore to avoid supporting the infrastructure, education, security, opportunity and well-being of American communities. Like the last such "holiday," it will be used by the super-rich to stuff their own gobs and game the markets -- not create jobs.

By the way, this "holiday" was the main concern of the super-cool, progressive techno-barons from Facebook, Google, Apple, etc., who eagerly joined Trump's "technology summit" in his golden tower after the election. Like the railroad tycoons and oil barons of old, we are all reliant on their products and services, but let's be clear about one thing, and keep it always in mind: today's techlords -- Apple, Facebook, Amazon, Google and the rest -- are one huge stinking basket of deplorables. And they will cozy up to Trump just as quickly and ardently as the most cretinous neo-nazi or Fox News zombie out there.

This brief, factual story is a harsh indictment of a society that has needlessly condemned huge swathes of its people to lives of hardship, decay, fear and division. Millions have been sacrificed on the altar of the extremist cult of market fundamentalism: the fanatical belief, fervently embraced by both parties, that the bloated profits of a privileged few far outweigh any and all consideration of the common good. Future generations will look back in astonished horror at how a country could degrade its own people in this way.

Why wasn't Trump's Treasury pick prosecuted for more than 1,000 foreclosure violations, illegally kicking families out of their homes? Apparently the desk -- or maybe it was a chair -- in the California attorney general's office decided to let Trump's crook go free. That's what the state's former AG -- now a new "progressive" US senator -- tells us. Letting the Trump crook loose was "a decision my office made." Not her, apparently; the office. Hey, maybe it was her computer that made the decision! I'll bet Putin got hold of it and told it to tell her to shut down the investigation.

A deliberate attempt by Congressional Republicans to re-stoke the nuclear arms race and weaponize space has been overwhelmingly approved with virtually no opposition from Democrats. According to a top expert from an actual manufacturer of actual missile systems, the proposal "defies the laws of physics and is not based on science of any kind. [It is] insanity, pure and simple." But the GOP extremist behind the proposal says his fantasy is "worth any price" for the (non-existent) "security" it will (not) give us. Apparently, our staunch progressive Democrats agree: and so a new nuclear arms race will begin. We seem to be living in a civilization that, for whatever reason or reasons, has decided to eat itself alive.

(Dec. 22) Like everyone else, I don't know the truth about the charges of Russian interference in the election. I do know that the overwhelming focus on this issue has led to a near-total neglect of the scandal that ACTUALLY cost Clinton the Electoral College vote: the hundreds of thousands of Democratic voters in key swing states who were disenfranchised by the vote-suppression laws that GOP-controlled states have passed. (Along with the deliberate neglect of voting machines in minority precincts, leading to breakdowns and "lost" votes, not to mention the arbitrary closing of hundreds of polling stations in minority precincts.) This is a blazing smoking gun, lying there in plain sight, a wanton act of "interference" carried out in broad daylight by red-blooded Americans, over the course of many years.

Now it may be that Putin somehow took over the Republican Party 20 years ago and began passing all these laws, and that he also took over the Democratic Party at the same time and stopped them from fighting these laws with all their might. Maybe the CIA has a "swell of circumstantial evidence" to prove this. Otherwise, I find it remarkable and frightening how the media/political class is ignoring this glaring, roaring, years-long scandal of the systematic disenfranchisement of millions of American citizens across the country. Even the Democrats are ignoring it, although it cost them the presidency (and perhaps some state offices as well) and is clearly aimed at people who overwhelmingly support the Democratic Party.

It's true that those being disenfranchised can never be major donors to the party, or provide officials and office-holders with cushy jobs after or in between their government service. But it's odd that even now -- or especially now -- the Democrats are ignoring this plain, provable, indisputable fact that led to Trump's Electoral College victory, and are instead focusing on an issue that they know will never be conclusively proved one way or another. Meanwhile, GOP-controlled states are putting in even MORE restrictions on voting, as in Michigan just a few days ago. The work of restricting the vote goes on and on, without any outcry, any scandal, any opposition.

Gutless to the very end. He began his presidency with a visit to CIA headquarters and a public pledge not to prosecute anyone there for the torture they carried out; and now, in his last weeks in office, he has buried a Senate report detailing horrific CIA tortures. (Last year, the CIA confessed to hacking the computers of the US Senate in an attempt to derail the report.) I have never seen any of Obama's admirers explain why he has protected the CIA's torturers so diligently, but it is a shameful blot on his record, one he might have redeemed, in part, at the end, when it would have cost him nothing politically and would have made it more difficult for Trump to follow through with his plan to bring back torture as a core policy. Now, the torturers will go unpunished, their evil deeds will remain hidden and they can get back to work under Trump. Obama knows this, but he deliberately chose not to do anything about it.

I don't think anyone who's read Dostoevsky -- particularly "Demons" and "Notes From Underground" -- can be too surprised at the eruption of the irrational we are seeing in political systems and societies across the world. He laid out vividly the particular nature of this irrationality: frenzied, fevered, self-destructive -- and even gleeful in its self-destruction, its self-laceration (as well as in its rabid lashing-out at demonized "others"). Odd that this intrinsic element of our human nature could have been forgotten or dismissed for so long; even odder when you consider that some of history's most savage and unbridled eruptions of this nature have occurred within living memory, during the course of the god-awful twentieth century. -- I was just jotting down these thoughts when I ran across the article by Pankaj Mishra, who makes some of these same points and many more, much better than I can, in an excellent piece of analysis. Worth a read.

Related Topic(s): CIA; Democrats; Republican; Security; Torture; Vladimir Putin, Add Tags
Add to My Group(s)
Go To Commenting
The views expressed herein are the sole responsibility of the author and do not necessarily reflect those of this website or its editors.