GO trains take bikes
(Image by GO Transit)   Details   DMCA
Okay, a bit of Lake Ontario -- the fabulous Waterfront Trail from Oshawa to Toronto, 60km, almost all in sight of the lake. Hardly any private mansions, and the towns with their marinas in between are funky. Accessible (free for bikes) on GO commuter trains from as far as away as Hamilton (the waterfront trail going west from Toronto is much less enjoyable).

I was afraid it might be too easy, and the lake boring after a while, but not so. It's always an orienteering game, and the trail is never straight (except for bridges).

I've done the Pickering-Toronto stretch (40km) twice now. The first time always a learning experience. My first trip was also the inauguration of my Presto card, the new gimmick to minimize user-worker contact, which I don't like, but I've got the hang of it by now. Do NOT forget to tap your card when leaving the GO train. Which I did, as I flew out of the station and over two hills and found the path. A bike is a form of meditation. Ram Dass's 'Be Here Now.' You get in a rhythm as you process your thoughts and the trip so far and what's ahead. Oh no! Didn't tap the card. So my first retracing of steps (not the first or last time).

The panorama, the air. Such a relief from Toronto. And no 'ribbons of death' to contend with. The deadly 401 a safe distance, buried behind lots of trees. Only the occasion rush of the electric train, the railway being the least deadly of our obsession with speed and distance. The two rail tracks just a tad wider than one car-truck lane. And when you make that 10--12 car-truck lanes and football-field size interchanges, the environmental impact is truly shocking.

You reach the Port Union Waterfront Park over two wooden walkways, with marsh and river underneath. Too bad the stern warning 'No swimming - high water'. The water looked fine, Google says it's okay. Bureaucracy. I could have found a cove and done my own thing, but on both my first and second trips, I was saving energy for the final haul getting through Toronto home.

My first trip, I decided to take the lakefront trail to Bluffers Park, to see the spectacular bluffs from below. There is a marshland rehab eco-park, the Dunkers Facility, a series of four manmade wetland cells that have been built to naturally treat storm water runoff before entering Lake Ontario. A fifth cell has been built to act as a natural wetland. You can go out into tall reeds, and smell the 'good' rot.

Then I discovered the unmarked dirt path along the top of the bluffs. That was the highlight: a meadow-woodland with the 90m cliffs and the tiny dots of boats below. And thousands of butterflies. I counted -- at least one every second, which over two hours = 60x60 = 3,600. 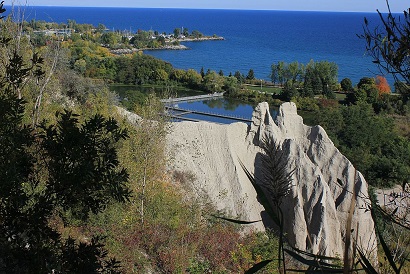 Then two hours through suburbia, with only two bouts of the deadly ribbons. You have to brace yourself on Kingston Road. You can feel the scowls as the cars and trucks race past. Kudos to the City of Toronto traffic signers and painters. Almost every turn accounted for. And, with the map handy and on the lookout for a pleasant pedestrian who will take the time and is not clueless about his/her surroundings, doable.

I love taking a break at the Harris Filtration Plant. Construction on the plant began in 1932 and the building became operational in 1941. An Art Deco cathedral-like structure, the interiors are just as opulent with marble entryways and vast halls filled with pools of water and filtration equipment. The Palace of Purification. 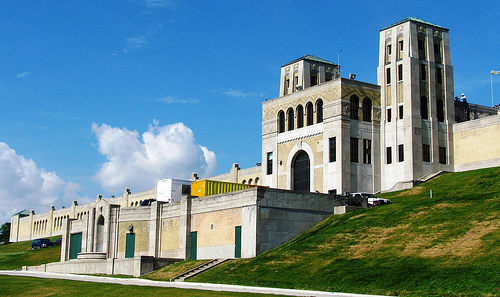 I've never seen inside, as it's closed Sundays and that's the only day you can enjoy cycling in Toronto anymore. My Sundays are spent in the 'Church of the Cyclist'. I close my eyes and see the endless meadows of GoldenRod, the 15-foot sunflowers and cup plants, breathe in the smell of late-summer nature at its busiest.

My second try, I decided Pickering again (I knew how to find the trail) and I would do the 'northern route' back. It looks much more ambitious, taking you up the Rouge River valley into UofT Scarborough campus on the Highland Creek trail. Now you have a sparkling brook beside you, a welcome change after the endless expanse of Lake Ontario.

Asking for directions from a runner being towed by a bulldog, we both seemed to need to walk, so I joined Jay on foot.

Me: It's too beautiful on the trail to ride. You miss too much. It's like a huge garden, exquisitely laid out.

I asked Jay what he did.

I'm a landlord, he said with a smile. He had been a high-flier money man with 'Schwab'. Huh? One of the largest brokerage firms in the US, he explained. When they went under here in 2006, they fired us all. I'd bought a house in Scarborough just in time, and I've been getting by, renting out the top two floors. I do jobs now and then. I like making money, but since I left Schwab, I came to realize that's not all there is to life.

I mentioned I'd lived in Russia. Hey, I travelled across Russia, Jay enthused. The Trans-Siberian to Beijing. It cost $1500. The best $1500 I've ever spent. Third class, three-story bunks. It was a hoot. But you have to like vodka.'

Related Topic(s): Green; Toronto; Travel, Add Tags
Add to My Group(s)
Go To Commenting
The views expressed herein are the sole responsibility of the author and do not necessarily reflect those of this website or its editors.