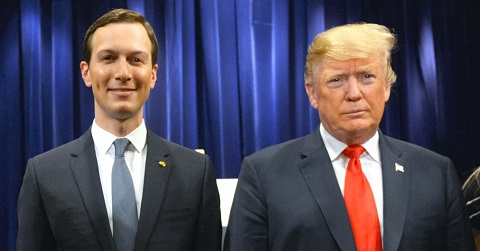 Trump son-in-law Jared Kushner, who Trump appointed as his coronavirus adviser believed that the media was overly-hyping the threat posed by the virus
(Image by Common Dreams)   Details   DMCA

Three world leaders have displayed a total lack of leadership qualities during the worst global calamity since World War II. Not surprisingly, all three are products of the extreme right-wing, a political faction that excels at carnival stunts and outrageous rhetoric but has repeatedly demonstrated a lack of governance ability. Among the leaders who have done the most miserable jobs at the helms of their respective ships of state are U.S. President Donald Trump, Brazilian President Jair Bolsonaro, and British Prime Minister Boris Johnson. The extremist nationalist planks and beliefs in far-out conspiracy theories upon which these politicians gained office resulted in their coronavirus responses being too little and too late.

Trump's initial reaction to the global pandemic was to call it a "hoax" spurred on by his Democratic opponents in the Congress. He then downplayed the threat claiming the number of virus cases would soon drop to zero. The Trump administration's handling of the pandemic contravened all well-established protocols, contingency plans, and emergency action responses carefully crafted over the past few decades by both Republican and Democratic administrations. Rather than work with state governors in coordinating a unified coronavirus response, Trump made personal attacks on the governors of Washington, New York, and Michigan, and permitted one of his White House surrogates to yell at the governor of Illinois during a phone call. In a conference call, Trump told several governors that they were on their own in obtaining needed ventilators and respirators for an expected groundswell of coronavirus hospital patients.

As with most things inside the Trump White House, where there was a crisis, there was potential profit. Trump son-in-law Jared Kushner, who Trump appointed as his coronavirus adviser, believed that the media was overly-hyping the threat posed by the virus. According to "Vanity Fair," Kushner told Trump to treat the coronavirus emergency as a P.R. [public relations] problem" and avoid taking aggressive action.

Kushner, who has no experience or education in anything of merit, also stood to see his family financially benefit from a national pandemic. Kushner's younger brother, Joshua Kushner, happened to be the founder of Oscar Health, a medical insurance company that was accused of selling junk health care policies in Ohio. As the coronavirus began sweeping across the United States, Oscar Health began advertising its 100 clinics at which it was planning to offer coronavirus testing. Kushner's family is a virtual mob operation. His father, Charles Kushner, is a federal ex-convict who had been convicted of campaign donation violations and jury tampering prior to attempting, along with Jared, to shake down the government of Qatar for a sizable cash infusion to save the failing Kushner-owned building at 666 Fifth Avenue in Manhattan. It is another example of the Trump era slogan: "The family that 'preys' together, stays together."

Trump did all he could that was possible to destroy any hope of international cooperation to meet the pandemic head-on. He and his pompous Secretary of State, Mike Pompeo, resorted to referring to COVID-19 as the "Chinese virus," an act that resulted in harsh condemnation from the government of China and the World Health Organization. Trump supporters in the United States and abroad had already resorted to carrying out Nazi-like racial attacks on people of Asian descent. The xenophobia situation in the White House worsened when one West Wing staffer was overheard by a journalist calling coronavirus, "Kung Flu."

Trump doubled down on referring to COVID-19 as the "Chinese virus." Trump's defenders said the term was no different from calling the deadly 1919 flu the "Spanish flu." However, that term, itself, was a misnomer, since it was traced to the World War I battle trenches in France.

Pompeo also saw a further opportunity to launch another attack against Iran. Pompeo, a science-denying fundamentalist who believes the Earth is a mere 6000 years old, attempted to widen blame on the coronavirus from China to Iran. Pompeo ridiculously said, "The Iranian leadership is trying to avoid responsibility for their grossly incompetent and deadly government. The Wuhan virus is a killer and the Iranian regime is an accomplice." It is clear that Pompeo was using a pandemic that had killed vast numbers of Chinese and Iranians to score cheap right-wing talking points. Iran, which had been subjected to punishing U.S. sanctions, found itself unable to obtain needed medical supplies from Western nations due to the U.S.-led embargo. With the connivance of the Israeli regime, Pompeo had actually increased sanctions on Iran after its first coronavirus patients appeared in the Shi'a holy city of Qom. Iranian Foreign Minister responded to Pompeo's outrageous comments in a tweet: "Unlawful US sanctions drained Iran's economic resources, impairing ability to fight #COVID19."

The U.S. Department of State, where such intellectual luminaries as Thomas Jefferson, James Madison, Henry Clay, Daniel Webster, William Jennings Bryan, Charles Evan Hughes, Cordell Hull, and George Marshall once commanded U.S. diplomacy, found itself in the hands of an arrogant and obese creature more intent on rendering pain than in providing comfort in a time of international distress.

Another leader who did his very best to spread the coronavirus was Brazil's Bolsonaro. After having spent time with Trump at the U.S. president's Mar-a-Lago "billionaire's compound" in Palm Beach, Florida, the close contact between the U.S. and Brazilian delegations resulted in positive coronavirus tests from members of Bolsonaro's delegation, as well as Trump's party, including the mayor of Miami, Francis X. Suarez.

After Bolsonaro and his virus-infected delegation returned to Brazil from Florida, Bolsonaro called the quarantine actions of Brazilian state governors and other officials to thwart the spread of the virus, which had already infected 200 people, "paranoia" and "extremism." Acting against the wishes of public health authorities, Bolsonaro called for public protests against the actions of the Brazilian Congress and Federal Supreme Court. Bolsonaro, breaching self-quarantine advice from federal health officials, proceeded to attend a rally of his supporters in central Brasilia's Praça dos Três Poderes square, to the horror of health professionals and the presidents of the Federal Senate and Chamber of Deputies, Davi Alcolumbre and Rodrigo Maia, respectively. In Trump-like fashion, Bolsonaro, who has been repeatedly tested for the coronavirus with denials that he has the virus, chided Alcolumbre and Maia for being cowardly.

As England, Scotland, Wales, and Northern Ireland began registering their first virus cases, Johnson was more pre-occupied by finalizing the ex post facto terms of Britain's withdrawal from the European Union. Johnson's critics said the Tory government dragged its feet on closing schools and universities, actions that had already been taken across Europe, the United States, New Zealand, and South Africa. Johnson also announced government financial assistance for businesses without crafting a policy to help working people, earning him House of Commons denunciations from the leaders of Labor, the Scottish National Party, and the Northern Ireland Alliance. Alliance MP Stephen Farry asked Johnson to seek at least a one-year extension to the Tory's favorite pet project, the Brexit implementation process.

Paraphrasing Winston Churchill's 1940 Battle of Britain speech, when it comes to Trump, Bolsonaro, and Johnson, history will record that "never before had so few done so little for so many."