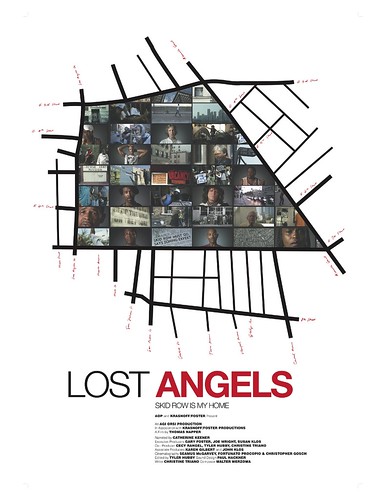 (Image by Unknown Owner)   Details   DMCA
Sometimes you just know when something's not right. You see it, or hear it, and you know instinctively there's something missing. You sense a faint beat where there should be a strong heart. You see a short phrase where there should be a full story. That happened to me just over a year ago in the early afternoon of April 24, 2009, when I saw the Los Angeles screening of THE SOLOIST, helmed by British director Joe Wright. The film just wasn't right.

A joint production of corporate giants Paramount and DreamWorks, THE SOLOIST enjoyed all the pre-release pomp and hype of a major Hollywood production. It was based on the highly touted, unlikely friendship between Los Angeles Times' columnist Steve Lopez and mentally ill Skid Row resident, Nathaniel Ayers, who, in his youth, was sufficiently talented to attend New York's famed Juilliard School of Music. To top it off, the film starred two of entertainment's most popular stars; Robert Downey, Jr. and Jamie Foxx. You can't get much better than that - or so I thought, until I actually saw the movie.

My anticipation for THE SOLOIST was higher than for most films. Homelessness, mental illness, poverty, and the streets of Skid Row had interested me for years - as far back as 1974, when at age 25, I moved to Los Angeles and started working along Skid Row at the Greater Los Angeles Community Action Agency, the nation's second largest anti-poverty program.

Poverty and homelessness were still foremost on my mind in 2009 when THE SOLOIST was released. The nation's economy was spinning downward and poverty was spiraling up. As mental health facilities closed across the nation, our mentally ill were forced into jails, prisons and onto the streets - often without their medication.

Naively, I found myself hoping that somehow THE SOLOIST, with its intriguing relationship between Nathaniel and Steve, would be the catalyst to inspire folks to step up and help the homeless. But as I would soon note in an article some could call scathing, my hopes were dashed by director Joe Wright's portrayal of Skid Row residents as "a tainted Gomorrah teeming with decadence and dereliction."

My admonitions would go even further:

"Director Wright committed a major injustice against the Skid Row community by creating a monolith of inhumanity which he melded them into. He showed throngs and throngs of drug-crazed, illness-crazed, violence-crazed people who rarely displayed a single lucid moment. Rather than pay respect to their suffering, Wright placed them in a cinematic stupor and filmed them in a Fellini-esque haze. But where Fellini created cartoons from actors he had hired to play cartoons, Wright created cartoons from people he had hired to play themselves."

Understandably, director Wright took umbrage with my portrayal of him as unsympathetic toward the Skid Row community and responded in kind, stating.

"To have the love that I hold dear for the community of the Skid Row residents called into question is very hurtful."

I apologize to Joe Wright if I misrepresented him as personally dispassionate. My outrage was out of concern for his film's over-the-top portrayal of the Skid Row community - an outrage I now know I was correct to perceive - which, ironically, Joe Wright inadvertently helped prove to me.

On June 1st, less than a month after writing my article, I received the following email via facebook from a woman who identified as Susan. It read:

Subject: Your editorial on "The Soloist"

I co-executive produced "The Chorus," a documentary that depicts the true nature of Skid Row and I would love for you to see it.

I'm doing a screening on Friday, June 5 at my screening room in WLA. Please contact me if you're interested in attending.

I look forward to hearing from you.

Without hesitation, I wrote Susan and accepted her invitation.

Serendipitously, perhaps even miraculously, a second movie had been made; a documentary originally titled THE CHORUS as a take-off on THE SOLOIST, that was now titled LOST ANGELS. It was an expose dedicated entirely to Skid Row and to the extras employed on THE SOLOIST. Joe Wright was an Executive Producer. Susan Klos, author of the above email, who'd read my article, was a Co-Executive Producer, and Thomas Napper, a long-time associate of Joe Wright, lovingly and patiently directed.

I attended the screening that Friday, accompanied by Jamie Romano, my friend and Skid Row advocate, who collaborated on my original article. What Jamie and I witnessed on screen that evening was the authentic portrayal of the Skid Row community that the The Soloist had dismissed. LOST ANGELS is an astonishing no-holds barred truth-fest; drenched in character, dipped in honesty, and steeped in heart. Every resident glossed over in THE SOLOIST is meticulously recaptured in LOST ANGELS through their stories and their visions of Skid Row.

Finally we meet the real people. We learn their names, their histories, their demons and their delights. Thomas Napper fills every frame with the realities of Skid Row. His lens shines the light on a people and a place too many choose to turn away from. He gives them his camera and they give him their confidence, their respect, and their truth. The result is an invitation, not an invasion, into their community of compassion, revelation and love.

Related Topic(s): Compassion; Hollywood; Homelessness; Homelessness; Los Angeles; Los Angeles Times; Movies; Reviews_ Movies; Schizophrenia, Add Tags
Add to My Group(s)
Go To Commenting
The views expressed herein are the sole responsibility of the author and do not necessarily reflect those of this website or its editors.