To hear the former Vice President tell it, on most issues of foreign policy and national security, President George W. Bush was basically a Dick Cheney spokesman 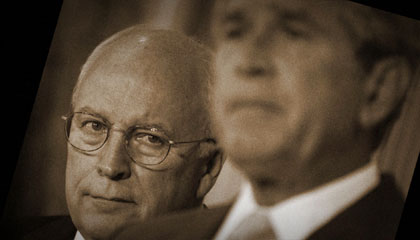 It's often been speculated that among the reasons Richard Nixon picked Spiro Agnew to be his Vice President back in 1968 was because Agnew, who, at the time was a newly-elected, first-term Maryland Governor, was also an in-over-his-head political lightweight who would serve as Nixon's "assassination insurance."   The theory was that no assassin would be foolish enough to knock off Nixon with a nincompoop the likes of Agnew waiting in the wings.

As former Secretary of State, Henry Kissinger wrote in a March, 1982 Time Magazine article: "Nixon never considered Agnew up to succeeding him. He occasionally said, only partly facetiously, that Agnew was his insurance policy against assassination."

Well, there are enough of us still here who were around at the time to recall how that turned out.   Not content with just being a nincompoop, Agnew quickly created his own arsenal of political malfeasance which led to his resignation in disgrace in 1973. But in addition to having caused his own demise, Agnew's arsenal of crooked behavior, working in staccato-like tandem with Nixon's far more considerable barrage of self-inflicted wounds, resulted in the Vice President having essentially assumed the role of de facto presidential assassin.   About a year after Agnew resigned, Nixon's presidency finally went down in flames.

If anything, those events should have served as a reminder -- to the likes of George H.W. Bush, who selected the stupendously underwhelming Dan Quayle as his running mate, or John McCain, who unleashed "rogue" Vice Presidential candidate Sarah Palin on America -- of the fact that both assassins and assassinations can take on many forms.