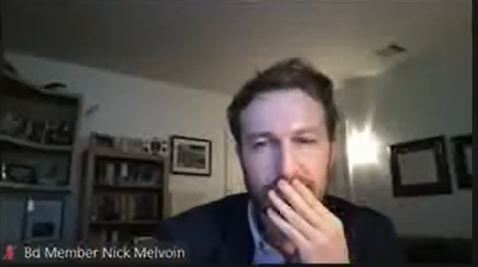 (Image by LAUSD)   Details   DMCA
of 2019, I joined the community at Fairfax High protecting the BIPOC special need students from a hostile takeover of their school. I stood next to an African American young man with Autism and I thought, 'Who would do this to him?' I understand why Nick Melvoin got elected, people were asleep in 2017. But now in 2021, Board District 4 is awake and we can do better." - Tracy Cook, Board District 4 Constituent

Los Angeles Unified School District (LAUSD) Board Member Nick Melvoin has been a valiant fighter for the charter schools that educate 20% of the students in the district. He was caught red-handed passing confidential information to the California Charter School Association (CCSA) as the charter school lobbyists sued the district in an attempt to stop bond funds from being used to make school campuses more accessible to those with disabilities. Melvoin and Monica Garcia were the lone votes to renew Prepa Tec charter school for another five years despite the fact that only 3.26% of this school's students met state standards in math and the school was $485,718 in debt and had no cash reserves. He openly mocked me for asking why the LAUSD had allowed the Community Preparatory Academy (CPA) to operate for five years despite obvious fiscal and academic concerns. The former Executive Director for this school later pleaded guilty to embezzling 3.1 million. As I speculated, she was using the charter school as her own personal piggy bank during the five years the school was allowed to operate by the LAUSD.

While championing publicly funded private schools, Melvoin has consistently acted against the interests of the 80% of students who attend LAUSD public schools. Despite a promise to look into the changes in my proposed "Board Meeting Accessibility to the Public" resolution, he later laughed at the effort and attempted to reduce the amount of speaking time available to stakeholders. He worked behind the scenes with the CCSA to craft a plan to make it easier for charter schools to obtain LAUSD facilities. Most disturbingly, he tried to push a school devoted to students with severe disabilities out of the Fairfax High School campus to make room for a vanity project.

Setting a bad example for all children in Los Angeles, Melvoin took no meaningful action when his ally on the school board, Ref Rodriguez, was first arrested for money laundering and then for suspected public drunkenness. Instead, he helped to hurriedly push through the hiring of Austin Beutner behind closed doors before Rodriguez was forced to quit after pleading guilty to the campaign finance-related charges against him.

Instead of working with teachers to avoid a strike in 2019, Melvoin was openly hostile to their cause of improving student outcomes. He told a town hall that teachers were going to go on strike for two days just to get it out of their system and then return to work with basically the same contract that they were offered prior to walking out. When parents backed the teachers and support of Austin Beutner waivered, Melvoin continued to stand by the Superintendent. Despite Melvoin's efforts, the resulting contract reduced class sizes, expanded the availability of school nurses, and reopened high school libraries.

As Beutner led the LAUSD through the COVID-19 pandemic he needed the support of a united school board. Working with the teachers' union, UTLA, the superintendent had crafted a plan that kept LAUSD students safe but Melvoin worked against his efforts. As the pandemic raged in February, Melvoin went on Fox 11 Los Angeles to insist "that having [kids] out of school, even though it's Zoom school, is not the answer." His astroturf group, Speak Up, pushed a false narrative that parents across the district were demanding that schools immediately reopen. However, when campuses allowed students back on campus parents in hard hit BIPOC communities mostly kept their children home.

It is with this record that Melvoin will face the voters next June. He already has one opponent. Dr. Raissa White is running on a platform of transparency, equity, and access.