"Sexual abuse allegations are not something that can shut down a charter...under the law.

The North Valley Military Institute (NVMI) is one of the rare cases where a charter school's renewal was rejected by the Los Angeles Unified School District's board. The school then appealed this decision to the Los Angeles County Office of Education. The county staff also recommended that the renewal be denied, but they were overruled by the unelected Board of Education. As a result, they continue to operate on the campus of LAUSD's Sun Valley High School.

Since LACOE overturned the rejection of the charter renewal the following have been revealed:

As LAUSD School Board Member Scott Schmerelson notes, all of these should have disqualified NVMI from being renewed. The fact that it was over the objection of the LAUSD Board provides a good case against giving charter schools the ability to appeal to the LAUSD's decision:

A week before the appeal was heard by the LACOE Board, Silke Bradford became a Director of their Charter School Office. While this was too late for her to be involved in the review process, it should have put in her in a position to have intimate knowledge of the events that led to the board overturning the LAUSD and their own staff.

I asked Bradford a couple of times if her staff had notified the county board about the pending lawsuit against the charter, and could not get a direct answer. She did suggest that perhaps they were not even aware of the allegations at the time, which would call into question how deeply the staff had dove into the operations of the school. I, therefore, asked her if determining the financial stability of a school required finding out if there were any pending lawsuits. Instead of answering the question, she suggested that I "should consider work as a charter authorizer seeing as how [I] seem to be passionate about the subject." I also gave her the opportunity to provide a statement by email but she did not reply. In contrast, Bradford's opponent, Lydia Gutierrez, replied directly that charter schools should be required to divulge all pending lawsuits at the time that they apply for renewal as "serious allegations need to be known."

When I stated in my endorsement of parent Patricia Castellanos that an activist in Oakland had shared his opinion that Bradford had not held charter schools accountable when she worked in that city, the candidate wrote me an email to express concern that my "vague concerns spurred by the 'activist' from Oakland" jeopardized my "journalistic integrity." Her supporters complained that this person's views were without merit.

My exchange with her over the NVMI renewal revealed a candidate who was extremely adversarial. Given the timing of her arrival at the county charter office and the fact that the LACOE Board ignored her staff's recommendation, this was a situation that she could not even be blamed for. However, she was still obtuse in her responses and eventually descended into name-calling. After a series of three emails and a Facebook exchange, I could see how a public education activist who dealt with her for years would come to the conclusion that "she wasn't just in the pocket [of charter schools], she was a true believer."

LAUSD Board candidate Gutierrez, is more direct when she says that "the serious issues that were pointed out about [NVMI] need to be addressed." She adds that "the LAUSD has already rejected this charter and this decision should have been respected." Instead the school continues to be co-located on the campus of Sun Valley High School. Bradford could have used her candidacy to help the public understand the failings that led to that outcome. The fact that she did not is an opportunity lost. 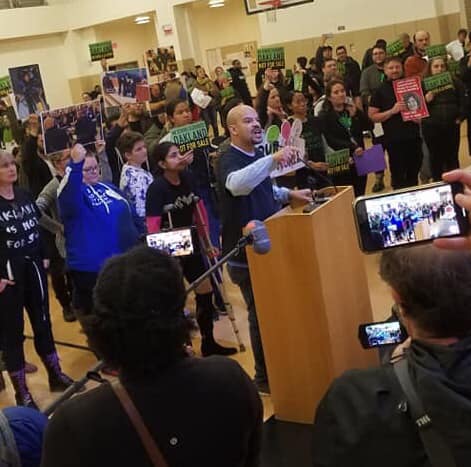