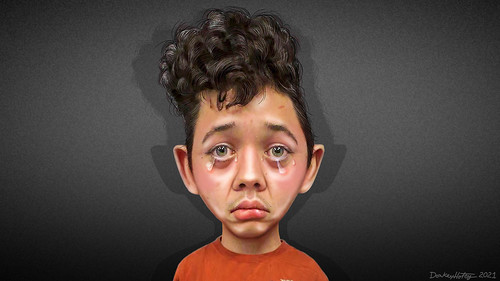 Within hours, the jury will begin its deliberations in the Kenosha Shooting Trial. I have also heard the main-stream media refer to it as the Kyle Rittenhouse Trial. Not once have I heard the case referred to as the Rittenhouse Murder Trial. Not once. Conversely, most of us are familiar with the Simpson Murder Trial. That is what it was called then and that is what it is called now; acquittal be damned. A few days ago when the man-child known as Kyle Rittenhouse "broke down" on the stand as he testified in his own defense, his mother soon followed consumed with overwhelming grief. Her sobs so intense that they were heard throughout the courtroom to the point that she required the physical console of the woman next to her. It is only cosmic accident that the consoling woman was Jo-Ellan Dimitrius: O.J. Simpson's former jury consultant. The biting wit of the universe never ceases to amaze.

Apparently there are, at least, two Kyles. There is Kyle the child and there is Kyle the man; fearless crime fighter and "protector" of car lots and gas stations located in another state. During direct examination by his defense counsel and asked to described events just prior to murdering his first victim, Kyle (the child) became a puddling amorphous mass of nothingness. His anguish so fierce that he seemed to have gone into convulsions. The anguish of Kyle (the child) was so severe that the presiding judge had to recess the court to allow Kyle to gather himself. Histrionics notwithstanding, Kyle (the child) never shed a single tear. Nary a drip of water.

Prior to his "breaking down" was Kyle the man; Mr. Rittenhouse. Who boldly and confidently testified about how he arrived from another state to "protect the gas station and the Car Source" complete with AR-15, body armor and a medical-kit. Kyle (the man) put out fires, "provided medical aid" and, in fact, was a certified EMT "working with the police". Kyle (the man) was a paragon of American virtue cast from the die of the likes of John Wayne, Wild Bill Elliot, David Duke, Ted Nugent, Donald Trump, and a million other European-American males that think that a gun makes up for the deep-seated feelings of inferiority they have due to certain physical and anatomical inequities.

Kyle Rittenhouse testified that he was getting his "face kicked in". Yet, his mug shots show not the slightest scratch. He was struck with a skateboard (on the head) but never went to the hospital for treatment; and the prosecution never brought it up. Kyle Rittenhouse sought out police, as they paraded down the streets in armored vehicles, with his hands up (after killing two people and seriously wounding another) in an attempt to surrender. Though his hands were up and his AR-15 was sling-ready the police thought he needed some water, and gave him some as they told him how much he was "appreciated". Kyle Rittenhouse had a friend drive him back home (to another state), he then checked his social media, made a few calls, had some snacks and then turned himself in to the local police department.

Kyle Rittenhouse the man, drank alcohol with, and in front of, his mother at the age of 17. The same mother that knowingly allowed him to possess a straw-purchased firearm at age 17 and openly bring it into her home with her younger children present. However, this fact exemplifies the governmental schizophrenia of the United States in that it sends 18-year-old children to die in war or buy a gun and there are several states where a 14-year-old can marry; downright criminal in every sense of the word. Generally speaking, one must be 21 years of age to consume alcohol (and drugs), but only 18 to vote. As a father, it seems to me that these things are distinctive but not different in terms of the maturity required to engage in either but that is, alas, another column.

Kyle Rittenhouse will either be acquitted or there will be a mistrial (possibly "with prejudice"). The prosecution has been breathtakingly inept and the presiding judge is a burlesque caricature brazenly hostile to the prosecution. The prosecution died before it was born by falling into the defense trap of being put on defense. Instead of prosecuting a case that should have focused on why this clearly disturbed adolescent crossed interstate lines heavily armed, they chose on trying to defend what they knew would be a self-defense case on the part of the defense. Further, Wendy Rittenhouse (Kyle's mother) should have been arrested long ago and facing a myriad of serious charges. Anyone that has ever seen a person under the influence of certain drugs can look at Rittenhouse's eyes on his mug-shot and see he was "on something". It is infinitely fascinating how certain people in the United States never have toxicology tests done when they commit heinous acts but, then again, they all look alike.

What is most troubling for me, aside from the loss of life perpetrated by the man-child known as Kyle Rittenhouse, are the consistent themes and parallels that I see as a Black Person in the United States. When I watched Kyle Rittenhouse walk around like he was God with a gun and police did nothing aside from show their appreciation, I kept trying to imagine a 17-year-old (or 100-year-old) Black Person in the United States committing a similar act and my brain discharges bad neurons. The same thing happens when I try to imagine a Black Person in the United States shooting a sitting U.S. president and being out of jail and living to tell the tale. Or, when I watched Los Angeles burn in 1992 exiting the 110 freeway and seeing row after row of Korean liquor-store owners on rooftops, in black neighborhoods, with fully automatic weapons and ballistic vests. Not once admonished nor fired upon and, yes, thanked by the police. That is a tale that has never been told, but it is on my "to-do list".

Kyle Rittenhouse, like the aforementioned Korean merchants, Gregg and Travis McMichael, George Zimmerman and Bernhard Goetz serve a purpose bigger than themselves. The purpose is to send a message to Black People in the United States and those who dare support them that they had better stay in their "places". This is a phenomena that is more widespread than most wish to believe; made particularly egregious by the so-called "liberal" and "progressive" ranks of European-Americans. Most of whom don't live within five miles of a Black Person in their gated communities. That is why no matter how "liberal" they claim to be, a European-American and every other American will tell a Black Person in the United States "I'll call the police!" in a heartbeat. That includes other Black People because they know what American police truly represent. There is no way a society can do what it has done to Black People in the United States and not be wary of them.

Today Fox News aired a radio program in which the host stated "you'll notice one thing, after Kyle Rittenhouse took action on that day and did what the police were incapable of doing, the protests ended". And I'll be damned if he wasn't right. Kyle Rittenhouse is now not only a poster child for Trumpian fascism, he is not only a hero, he is not only a patriot; he is a very, very wealthy young man. How dystopian a society there must be for murderers to become celebrities. In fact, I would not be surprised to see Rittenhouse in politics someday as the biting wit of the universe reveals its mirthful self once again.

8 people are discussing this page, with 16 comments