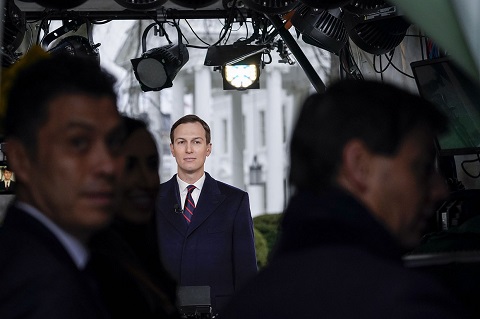 Kushner told the nation that the Strategic National Stockpile of medical equipment and supplies belonged to the Trump administration and not to the states
(Image by politico.com)   Details   DMCA

The government of Barbados Prime Minister Mia Mottley was shocked when the Trump administration seized over 150 ventilators ordered and pre-purchased by Barbados from five different foreign sources. Although Barbados Health and Wellness Minister Lieutenant Colonel Jeffrey Bostic said there are no shortage of ventilators in the country to deal with its current level of Covid-19 cases, the seizure by the U.S. has resulted in icy relations between Barbados and the United States.

Bostic claimed that some ventilators donated to Barbados by Bajan native Rihanna, the international pop music star, were not among those confiscated by the U.S. government. Mottley had authorized what was described as an "open cheque" to purchase critical medical supplies from abroad.

The United States has also reportedly seized medical equipment and supplies destined for Cuba, Iran, and Venezuela because of draconian sanctions placed on the three nations by the Trump administration. Kushner's team has also blocked 3M Corp. from sending PPE shipments to Canada, even though the firm relies on a pulp supplier in British Columbia to produce masks.

In a recent televised White House press briefing, Kushner told the nation that the Strategic National Stockpile of medical equipment and supplies belonged to the Trump administration and not to the states. Several state governors pushed back on the federal stockpile being solely the property of the federal government.

Relying on an unholy alliance of Jewish criminal syndicates and federal law enforcement authorities, Kushner has embarked on a program of theft and piracy of medical equipment destined for foreign and state end-users. What does not end up in the U.S. federal stockpile is reportedly being shipped to Israel. The Kushner family and Israeli Prime Minister Binyamin Netanyahu have been close friends for several decades. Netanyahu has directed Mossad to obtain ventilators and PPE from abroad. The authorization reportedly extends to theft of such equipment and supplies.

Berlin's Interior Minister Andreas Geisel said a Berlin police order for 200,000 face masks destined for Germany from a 3M plant in China were confiscated by U.S. authorities in Bangkok and diverted to the United States. Geisel called the seizure an "act of modern piracy," insisting that the U.S. "shouldn't use Wild West methods."

Brazilian Health Minister Luiz Henrique Mandetta said that Brazilian medical equipment orders in China, waiting to be shipped to Brazil, were intercepted by the U.S. agents and flown to the United States in 20 cargo aircraft. The Brazilians were forced to drop their order after its confiscation by the U.S.

The governor of the Grand Est region of France, Jean Rottner, said medical supply orders by his government were being outbid at the last minute by the United States. He told RTL France, "On the tarmac, the Americans get out their cash and pay three or four times what we have offered." The U.S. managed to buy a shipment of supplies to Grand-Est while they were on the runway in Shanghai. Valerie Pecresse, the governor of the Ile-de-France region, indicated the same occurred with orders placed by her government. She told French BFMTV, "They [the Americans] offered three times the price and they proposed to pay upfront. I can't do that. I'm spending taxpayers' money and I can only pay on delivery after having checked the quality." Renaud Muselier, the president of the Sud region, backed the claims made by Rottner and Pecresse. If what the French regional governors have revealed is correct, Kushner's team is paying triple or quadruple the price for goods that may be substandard and dangerous to the medical personnel relying on them for protection.

A shipment of 100,000 masks destined for Cuba, donated by Alibaba magnate Jack Ma, who Trump claims as a friend, were denied a cargo flight because of Trump's embargo on Cuba.

Jamaica's Ministry of Health and Wellness is concerned that Trump's policy may result in the interdiction and confiscation of medical supplies being sent by Jamaican expatriates in the United States to Jamaica - read more here.

It is not only foreign countries that are dealing with Kushner's piracy, theft, and hoarding, but U.S. states. Wyoming Republican Governor Mark Gordon complained that the federal government was seizing shipments of PPEs ordered by his state and shipping them elsewhere. Gordon told the Casper Star Tribune, "It is very frustrating, extremely frustrating, when we have orders that are supposed to be on their way and find that FEMA, the agency that's supposed to be helping us, is preempting that order." Hospital workers in Wyoming are being forced to re-use protective masks because of shortages prompted by the Trump administration's seizures of their orders, some of which were placed directly with Chinese manufacturers. Gordon's frustration with the Trump administration has seen him being increasingly criticized on social media by real or virtual Trump supporters.

In March, a shipment of 3 million masks ordered by the Commonwealth of Massachusetts from BJ's Wholesale was seized by federal authorities at the Port of New York. Massachusetts Republican Governor Charlie Baker was not even told what agency confiscated the masks and under what authority it did so. However, Kushner's "Kosher Nostra" associates have all of the New York area's ports well within their domain of racketeering operations. After the confiscation, medical supplies were flown directly from China to Massachusetts on board a jet owned by the New England Patriots.

The federal government also seized a shipment of N95 masks ordered by Somerset County in New Jersey. Freeholder Director Shanel Robinson said the feds confiscated a shipment of 35,000 masks on April 3. Robinson and New Jersey Governor Phil Murphy were not told what agency confiscated the masks but they are demanding they be returned to Somerset County. Similar complaints that unknown federal entities have interdicted ventilator orders have come from Colorado Governor Jared Polis.

Related Topic(s): Corona Virus Coronavirus Covid-19; Corona Virus Coronavirus Covid-19; FEMA; Government; Health; Hospital; Jared Kushner; Medical; Trump; Ventilators, Add Tags
Add to My Group(s)
Go To Commenting
The views expressed herein are the sole responsibility of the author and do not necessarily reflect those of this website or its editors.