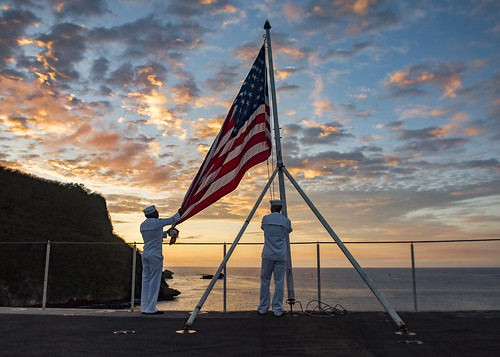 Peace and conflict are the opposite state of circumstances. Where there is peace, there is no conflict. But where there is war and conflict, there is no peace. The world, getting globalized, has witnessed an egregious situation in terms of opposite relation of peace and conflict. If the one corner of the world is under horrors of conflict, the other cannot remain peacefully prospering. At least, it experiences terror and awe due to the fire and dreadfulness of conflict in the other far-flung corner.

Similarly, the awesome situation in the East Asia can be observed particularly when the administration has decided to deploy its warrior fleet close to the North Korean water boundaries. There are many reasons to define the deployment as the scenario, converse to the peace: first, the topnotch leadership gives acrimonious statements against their rival and utilize a threatening language. The Trump administration has stated to maintain the balance of power in the and avowed to ensure peace.

On the other hand, the Korean leadership responded with rancorous remarks and affirmed to defend their land with firmness and resolve. Second, the rival states engage the rival into its own region and attempt to downside their morale employing variety of direct and indirect approaches. The decision-makers have concluded many protocols and agreements with South Korean governments for the strategic goals, aiming at the encirclement of the discomforting states such as .

Similarly, the North Korean Government enjoys the close patronage of under its security perceptions. Thus, union into the rival alliance reveals the intensity-seeking pathways by the two sides. Accordingly, these two reasons are the specific indication of the abnormality in relations between and . Third, the military deployments are the herald of the abnormal relations among the states. Particularly, the deployment of the military division on the borders or the mobility of the naval war fleets into the hostile region affirms the intense situation, prevailing between the two rivals.

The has recently deployed its war-fighting aircraft carriers close to the . That is why it is maintained by the analysts that President Trump's deployment of an aircraft carrier to the waters off the has raised tensions across . Accordingly, the threatening statements by the rivals' leaderships, the strategic engagement into hostile alliances and the mobility and the deployment of the armed forces on the enemy's borders have presently corroborated the intense confrontation between and .

The deployment of the aircraft carrier is the omen of the horrors of the nuclear war the world may witness in the East Asian region. In fact, it is a region whose peripheries are suffocated with the immense populace. , Subcontinent, , , and even both Koreas contain a major chunk of the population in the world. That is why a single inflammatory undertaking may lead to the irreversible loss of human in history. More hideously, is equipped with nuclear arsenals and is headed by a leadership with stubborn, arrogant and resolute attitude to defend their homeland.

Under such scenario, the said deployment is an unpleasant event that may generate the terror on one hand and may become the cause of the havoc for the human lives within moments. Therefore, the responsible policy-makers are required to behave responsibly and play their reasoned role in defusing the unlikely situation that brought the deployments of aircraft carrier into practice.

Related Topic(s): Conflict; Peace; Responsibility, Add Tags
Add to My Group(s)
Go To Commenting
The views expressed herein are the sole responsibility of the author and do not necessarily reflect those of this website or its editors.