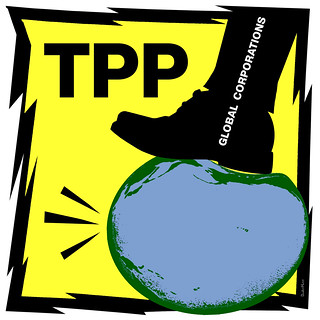 So how has that worked out? New data is in on trade with South Korea and the numbers are really bad. Really bad. Public Citizen's Eyes on Trade has looked at the data and a post up showing what the numbers mean:

-- The U.S. goods trade deficit with South Korea has increased 115 percent, or $16 billion, in the first four years of the Korea FTA (comparing the year before it took effect to the fourth year data).

-- This increase in the trade deficit with Korea equates to the loss of more than 106,000 American jobs in the first four years of the Korea FTA, counting both exports and imports, according to the trade-jobs ratio that the Obama administration used to promise job gains from the deal.

-- Since the FTA took effect, U.S. average monthly exports to Korea have fallen in 11 of the 15 U.S. sectors that export the most to Korea, relative to the year before the FTA.

-- Exports of machinery and computer/electronic products, collectively comprising 28.6 percent of U.S. exports to Korea, have fallen 22.6 and 6.6 percent respectively under the FTA.

Automobile trade data also just came out. (Note: This had not yet posted at Global Trade Watch as of Thursday at 2 p.m. Eastern.)

These numbers represent real damage to our economy, jobs, wages (all those people are competing for the remaining jobs now), and -- and this is important to our country's future in the long run -- to our manufacturing ecosystem. As factories close, the suppliers go under; the experience, education and training system for how to run the factory moves away; the industries' design and innovation knowledge migrates out of the country.

This is what happened with the KORUS agreement. Sold as "jobs" but in reality jobs and factories and knowledge move away. But a few Wall Street types get to pocket the wage differential in the short term, so they pay politicians and "think tanks" to support this "free trade" ideology.

Trade is supposed to be about people in areas where bananas can grow being able to get things from areas where they can't. But "free trade" is not about "trade" at all. It is about Wall Street shareholders moving jobs out of the US to places where workers are exploited and governments let companies pollute. Then they pocket the wage and environmental protection cost differential and the resulting loss of jobs pits the remaining workers against each other, driving down American wages. Hence the terrible inequality we see today.

This isn't "trade" and the countries where we send the jobs and factories do not "trade" with us. It is entirely about "lowering costs" so the workers there do not make enough to buy things made here. The result of "free trade" is that the US has had a trade deficit every single year since "free trade" ideology was sold to us in the 1970s. Working people's wages have not increased since "free trade." Inequality has soared. Democracy has declined.

Related Topic(s): Exports; Jobs; Obama And Tpp; Trade, Add Tags
Add to My Group(s)
Go To Commenting
The views expressed herein are the sole responsibility of the author and do not necessarily reflect those of this website or its editors.