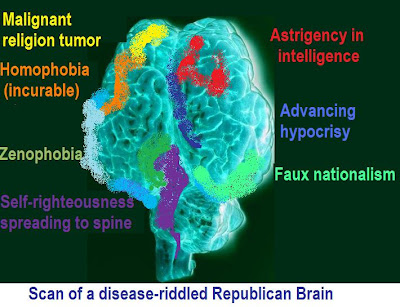 The guy whose brain was scanned for the above picture doesn't have a chance of survival - at least not as an American human being. He has been diagnosed as one of those unfortunate beings who places in the lowest twenty percent of self-identified Republicans and as such suffers chronic attacks of bigotry, intolerance, self-righteousness, secessionist tendencies, overbearing (fake) patriotism, hard-boiled homophobia, and totally rank hypocrisy. His I.Q. has been reduced to a level below that of an amoeba. This reduction is brought on by irrational hatred of just about everything he is told to hate.
None of these terrible conditions have ever been treated simply because he was unaware of them. If caught in time (before the age of reason since these viruses attack rudimentary reasoning first) they might have been treated. The most obvious sign that his mental capacities were impaired was when he stated on a Research 2000 survey that he thought Sarah Palin was better qualified for the position as President of the United States than Barack Obama. Examining researchers were horrified that this man's deterioration had been so long and advanced.
He also AGREED to all of the statements below. To be fair, they were put in question form, and some ideas were delineated by proper grammar, so they might have been put in a way that may have been difficult for him to understand.

NEGATIVE THOUGHTS AND IDEOLOGIES
OF REPUBLICANS

Contraceptives should be outlawed 31%
Creationism should be taught in public schools 77%
Gay couples should not have state or federal benefits 68%
Gays should not be allowed to serve in the military 55%
Gays should not teach in schools 73%
Illegal immigrants should not be allowed to work here 59%
Jesus Christ is the only way to salvation and heaven 67%
Marriages are equal partnerships 76%
Obama is a racist 31%
Obama is a Socialist 63%
Obama should be impeached 21%
Obama wants the terrorists to win 24%
Obama was not born in the United States 42%
Sarah Palin is more qualified that Barack Obama 53%
Sex education should not be taught in schools 51%
The birth control pill is abortion 34%
There should be no same-sex marriages 77%
Women should be able to work outside the home 86%
You support the death penalty 91%
Your state should secede from the U.S. 23% Put together in a graph, the poll shows us that there is the possibility that a substantial amount of people could have agreed with ALL of these statements. Let's look at it in another way:

Now let's look to possible variables: some Republicans did NOT agree with every statement. Some statements may not be considered too radical. Also, some statements do no necessarily mean that a person negates the opposite. E.G., it's possible that some Republicans believe that Creationism should be taught along WITH evolution. Variables aside, however, the results of the poll (2,000 self-identified Republicans across the country and across demographics) show a very, very sczisophrenic group of people, the majority of whom agree with the statements that: a. abortion is murder, but they would voted for the death penalty, b. gay cannot teach in public schools, but some of them could serve in the military, c. purport to be patriots but some of them want to secede from the Union, and d. folks who think abortion is murder would also outlaw contraceptives - at a time when more "misbegotten" children are born than at any other time in history.

Indeed, the reasoning power of self-proclaimed conservatives has been on a downward spiral for the last generation. That may be why the number of self-proclaimed Republicans has decreased steadily since the 1960s. 55 million people in the U.S. were registered Republicans in 2004. It's doubtful that today's number is in the high 40's. Look at the bottom part of the graph and make some assumptions of our own: counting a wide range of variables, that bottom 20% can be honed down to 10%, don't you think? Is that fair? 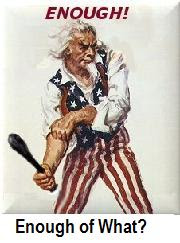 (Image by Unknown Owner)   Details   DMCA
Well, if it is, than 10% of people who identify as Republicans are: pro-Sarah Palin, anti-Obama people who will refuse to let their children have any sex education let alone purchase condoms. They will allow their women to work outside the home and think that their marriages are equal partnerships, although domestic violence cases continue to rise. They will certainly support the death penalty but at the same time chant that they are "pro life," without any qualms of hypocrisy. Some of them want gays to serve in the military more than they want them to teach in schools, but giving them any rights concerning marriage or spousal claims is beyond their comprehension. Finally, why any of them would think that Obama WANTS the terrorists to win is incomprehensible. That statement alone defines the bottom 20% as irrational and, dare I say it, not qualified to vote.

And according to the least amount of calculation, there are approximately 4 MILLION people out there who have agreed to ALL OR MOST OF THE STATEMENTS. Four million. Who are voting irrationally. Who are amongst us. Who want their state to secede from the Union. Who do not like the rest of the people in the U.S. simply because they are not made of 100% whatever they label themselves as.

I'm sorry, but it looks to be true. Movements start with just a few people, but when movements begin to mass and affect the nation's psyche, then we all have to deal with them. Sorry, but at this time, to go on would make me seem like a fearmonger. Please, just think about it.

Rev. Dan Vojir is has been writing/blogging on religion and politics for the better part of ten years. A former radio talk show host (Strictly Books " Talk America Radio Network) and book publisher, Dan has connected with some of the most (more...)
Related Topic(s): ACORN; Bigotry; Disease-Virus-Epidemics; Homophobia; Homophobic; Negative Values Behaviors; Obama; Patriotism; Republican Hypocrisy; Republican Racism; (more...) Republican Religious Right Wing Nuts, Add Tags  (less...)
Add to My Group(s)
Go To Commenting
The views expressed herein are the sole responsibility of the author and do not necessarily reflect those of this website or its editors.