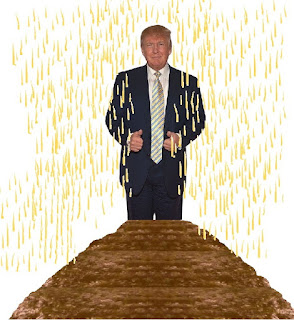 Caption: 2017 Political Climate Forecast : "And more on the way!"

2017 will only make sense if Trump is impeached.

Trump's problems are piling up and there may come a time when even the Republican Party will not support him.

In accordance with his way of celebrating Martin Luther King Day, Trump lambasted Civil Rights icon John Lewis via Twitter (of course) after Lewis said that he would not be attending the inauguration and called Trump "illegitimate". Trump called Lewis' 5th District "crime-infested" and "falling apart" and said that Lewis was "all talk and no action".

Lewis' 5th District includes Atlanta, which is considered one of the fastest growing cities in the country job-wise and has a much higher standard of education than the rest of the nation.

In sum, Trump is exaggerating when he says Georgia's 5th is "falling apart" by some metrics and, by others, he's flat-out wrong.

Of course, we expected no less from Mr. Trump, whose petulant temperament takes childishness to a new level. But will the country (and the Republican Party) hope for a more "Presidential" demeanor from this child-President?


"PissGate" Will Take Its Toll

The rancor and suspicions as to Trump's Russia ties caused by the now infamous dossier leaked to Buzzfeed will not be going away soon. Credibility aside, the fact that Trump's temperament aligns with the story of revenge is enough to plant questions in people's minds for a long time and spawn conspiracy theories to counter right-wing groups' denials.

So who will protect Trump when the going gets rough?

MOSCOW (AP) -- With eager anticipation, the Kremlin is counting the days to Donald Trump's inauguration and venting its anger at Barack Obama's outgoing administration, no holds barred. 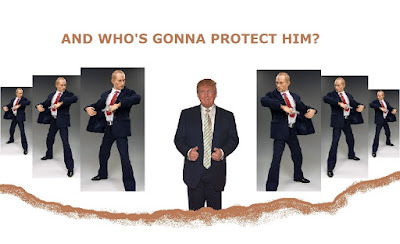 Who will protect him?
(Image by rev. Dan)   Details   DMCA

It took 17 intelligence agency reports, an M16 agents report, numerous Russian allies working ON the campaign, photos of actual meetings of said campaign staff with Putin and his cronies and Trump giving Putin verbal bj's on stage for over a year for the government to actually decide to investigate.

The Problem Is: The Christian Right may have had a lot to do with it:

Two of the "pro-family" lawmakers behind Russia's ban on "homosexual propaganda" are now behind a bill that would "downgrade assault inside the traditional family unit from a criminal offense to a misdemeanor," according to a report by Tom Balmforth of Radio Free Europe.


Earlier this week, one of the members of that board, Richard Land of the Southern Evangelical Seminary, appeared on the "Point of View" radio program, where he told host Kerby Anderson that he has been shocked by how much influence he and other Religious Right activists have had over the make-up of Trump's administration.

While rarely mentioning God before or after the campaign, Trump has systematically appointed lackeys to the Christian Right. Very wealthy Betsy DeVos has been a staunch Christian Reform Church member all her life and her policies smack of Dominionism:

"Our desire is to confront the culture in ways that will continue to advance God's Kingdom."

For any other incoming president, such a pile of controversies and crises would suggest an early political disaster is imminent for the new White House. But Trump broke the mold in his outsider campaign and has repeatedly shrugged off scandals and controversies that would have downed normal politicians. He appears determined to shake up conventions that have built up around the presidency for two centuries and has little time for those who say he lacks presidential demeanor.

Making Hay Off The Presidency

A multi-million dollar expansion of President-elect Donald Trump's golf resort in Scotland is reportedly underway"--"less than a week after Trump's attorney told reporters that the president-elect had, in an effort to distance himself from conflicts of interests with regards to his businesses, "ordered that all pending deals be terminated."


One Glaring New Conflict Of Interest:

We've already pointed out that Trump has a branded Tower in Manila, but now he'll have TWO:

One of the most most glaring conflicts is set to open up this quarter: Trump Tower Manila, a 57-floor skyscraper inside Century City, in a gentrifying area of Manila's business district. It's a joint project with Century Properties Group, Inc. (CPGI), a Filipino real estate development company owned by Jose E.B. Antonio, who is also a special trade envoy to the United States. If the partnership between Trump and Antonio is structured like many of his other business deals, with Trump licensing his name in exchange for ongoing payments, Trump will essentially be on the payroll of a member of controversial Philippines president Rodrigo Duterte's government.


These and all other s will dog him for a long long time and be the basis for future objections to Presidential actions. "notalegitimatepresident.org should pop up soon.

Again, all f this comes down to one question: will trump's alternate reality prevail?

Because in his world, Donald Trump has no problems.

Rev. Dan Vojir is has been writing/blogging on religion and politics for the better part of ten years. A former radio talk show host (Strictly Books " Talk America Radio Network) and book publisher, Dan has connected with some of the most (more...)
Related Topic(s): Culture; Inauguration; Revenge; Trump Cabinet; Trump Diplomacy; Trump Foreign Policy; Trump Idiot-in-chief; Trump Presidency; Trump Russia Memos, Add Tags
Add to My Group(s)
Go To Commenting
The views expressed herein are the sole responsibility of the author and do not necessarily reflect those of this website or its editors.