Cross-posted from The Guardian
The only official punished for the illegal NSA program was the one who discussed it. The same is now true of torture 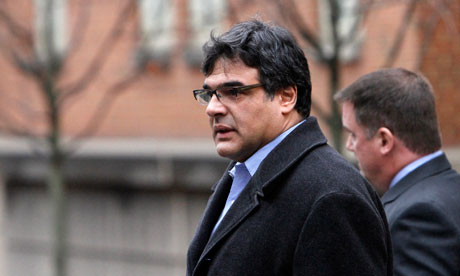 (Image by Unknown Owner)   Details   DMCA
Former CIA officer John Kiriakou becomes the only government official convicted in connection with the US torture program: not for having done it, but for having talked about it. (Photograph: Jacquelyn Martin/AP)

The permanent US national security state has used extreme secrecy to shield its actions from democratic accountability ever since its creation after World War II. But those secrecy powers were dramatically escalated in the name of 9/11 and the War on Terror, such that most of what the US government now does of any significance is completely hidden from public knowledge. Two recent events -- the sentencing last week of CIA torture whistleblower John Kirikaou to 30 months in prison and the invasive investigation to find the New York Times' source for its reporting on the US role in launching cyberwarfare at Iran -- demonstrate how devoted the Obama administration is not only to maintaining, but increasing, these secrecy powers.

When WikiLeaks published hundreds of thousands of classified diplomatic cables in 2010, government defenders were quick to insist that most of those documents were banal and uninteresting. And that's true: most (though by no means all) of those cables contained nothing of significance. That, by itself, should have been a scandal. All of those documents were designated as "secret," making it a crime for government officials to reveal their contents -- despite how insignificant most of it was. That revealed how the US government reflexively -- really automatically -- hides anything and everything it does behind this wall of secrecy: they have made it a felony to reveal even the most inconsequential and pedestrian information about its actions.

This is why whistleblowing -- or, if you prefer, unauthorized leaks of classified information -- has become so vital to preserving any residual amounts of transparency. Given how subservient the federal judiciary is to government secrecy claims, it is not hyperbole to describe unauthorized leaks as the only real avenue remaining for learning about what the US government does -- particularly for discovering the bad acts it commits. That is why the Obama administration is waging an unprecedented war against it -- a war that continually escalates -- and it is why it is so threatening.

Related Topic(s): Felony; Leaks; Obama Cover-up; Obama Same As Bush; Torture; Transparency; Whistleblowers-ing, Add Tags
Group(s): Science, Technology and Society (STS), Add to My Group(s)
Go To Commenting
The views expressed herein are the sole responsibility of the author and do not necessarily reflect those of this website or its editors.