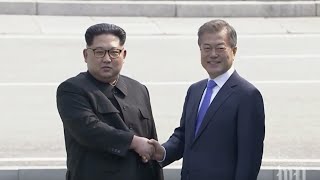 To say the least there's been a significant relaxing of tensions between the two Korea's the last few months since Moon first reached out to Kim in a January 2018 news conference saying he'd be willing to hold talks with the North Korean leader. And In February it was actually Kim who invited Moon to meet in yesterday's summit.

Though significant in itself this summit yesterday should be considered a good first step as a foundation to build upon when Kim meets face to face with US President Trump in late May or early June.

In fact Trump-as his want-tweeted about the KIm/Moon summit, "Good things are happening, but time will tell". Fifteen minutes later in all caps, "KOREAN WAR TO END".

On the surface "things" appear to be moving in the right direction. But it's Trump's summit with Kim that really matters. Because the results of that summit hold the key to what's going to happen moving forward regarding the entire Korean Peninsula.

It's no secret Trump wants Kim to give up his nuclear weapons. Yet those weapons have been the deterrent that essentially kept the US from attacking North Korea and initiating regime change.

Kim has said he is willing to give up his nuclear weapons and have a nuclear free Korean Peninsula. He's also said he no longer needs to conduct nuclear and long range missile tests because his country has mastered how to mount a nuclear warhead on a missile.

By Trump's tweet and Kim and Moon issuing a statement they would push for a conference including the US and China "declaring an end to the Korean War" and "replace the armistice with a peace treaty" that long ago war may be coming to an end.

But that would only be an initial step. The really hard part is what comes next.

Let's face it Kim isn't going to give up his nuclear weapons unless the US agrees to the following:

The US agrees it will not attack the country.

The US ends all US economic sanctions against North Korea.

Ends all the combined US, South Korea, Japan war games off the Korean Peninsula.

Retired. The author of "DECEIT AND EXCESS IN AMERICA, HOW THE MONEYED INTERESTS HAVE STOLEN AMERICA AND HOW WE CAN GET IT BACK", Authorhouse, 2009
Related Topic(s): Korea, Add Tags
Add to My Group(s)
Go To Commenting
The views expressed herein are the sole responsibility of the author and do not necessarily reflect those of this website or its editors.