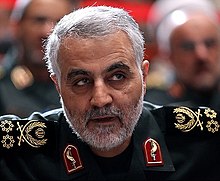 Those who applaud the assassination of General Soleimani seem to simply equate him to a terrorist who certainly deserved to meet his fate. The question here is not whether he deserved to be killed, but can his killing be equated to those of Osama Bin Laden or Abu Bakr al-Baghdadi, the leaders of al-Qaeda and ISIS respectively? They were the leaders of ferocious terrorist groups, stateless, not associated with any international organization, nor were they recognized by a single country. The same cannot be said about Soleimani. Regardless of how vicious, he was a very high-ranking government official in Iran, second only to Khamenei.

There are scores of other heads of state who are as brutal if not more so than Soleimani; are we now going to assassinate these individuals or their deputies only because they are ruthless leaders? Are Turkey's Erdogan, or Russia's Putin, or China's Xi, or North Korea's Kim, or the Philippines' Duterte less ruthless than Soleimani? These cruel leaders, who Trump openly admires, have committed unspeakable atrocities.

Just imagine what would have happened if Iran attacked a convoy escorting Vice President Pence and killed him just as he boarded his car near Riyadh airport. How would Trump have reacted? I venture to say that for Trump, this would have been tantamount to a declaration of war, just as Tehran viewed the attack on Soleimani. Trump would have retaliated in a massive way because an attack on a top US official by an adversary would simply be unacceptable by both Republicans and Democrats alike.

This begs the question as to what sort of global order we will have left if the leaders of one country eliminate the leaders of another simply because they deem them ruthless. Nothing but global chaos would ensue, destroying the very idea of an international order that governs the conduct of sovereign states toward one another. This would also defy the United Nations' founding principles and make it extraordinarily difficult for the community of nations to work together to solve bilateral and multilateral problems to make the world a safer place.

What is worse in the case of Soleimani is that he was assassinated at this particular juncture on the order of Trump, which was intended to distract public attention from his political wounds and woes. Never mind that the Trump administration produced no shred of evidence of an imminent danger; nevertheless, he gravely risked our national security strictly for his own personal political benefit. It is an election year, and he is now facing an impeachment trial in the Senate on charges of abuse of power and obstruction of Congress. If the past three years offer any indication, Trump would stop short of nothing, including obstruction of justice, cheating, lying, making misleading statements, threatening, bribing, and yes, killing foreign leaders to get reelected.

The Ukraine debacle, which blew up in his face and those of his top political advisers, pales in comparison to the assassination of Soleimani, which brought us to the verge of war with Iran -- a war that would have made the Iraq war look like child's play. A war with Iran would exact thousands of American casualties at an astronomical cost while plunging the Middle East in an unending violent conflict that would spare none of our friends and allies.

Trump acted just like a dictator, and every single Republican member of Congress who demonstrates more loyalty to Trump than to the nation becomes complicit in his betrayal of the country. Senators, as jurors in his impeachment trial, have the opportunity to convict him based on the overwhelming evidence that he abused his power and obstructed Congress.

He must be stopped now because he is too dangerous and too reckless to be entrusted with national security and the well-being of the nation. The Senators who exonerate him in his trial will be traitorous and will put themselves on trial come November.

Under any circumstances, Trump will leave office as an impeached president who made the world much less safe by playing into the hands of America's enemies. We and our allies will end up paying the price.

Related Topic(s): Assassination; Global Opinion; Impeachment; Iran; Killing; Soleimani; Trump, Add Tags
Add to My Group(s)
Go To Commenting
The views expressed herein are the sole responsibility of the author and do not necessarily reflect those of this website or its editors.