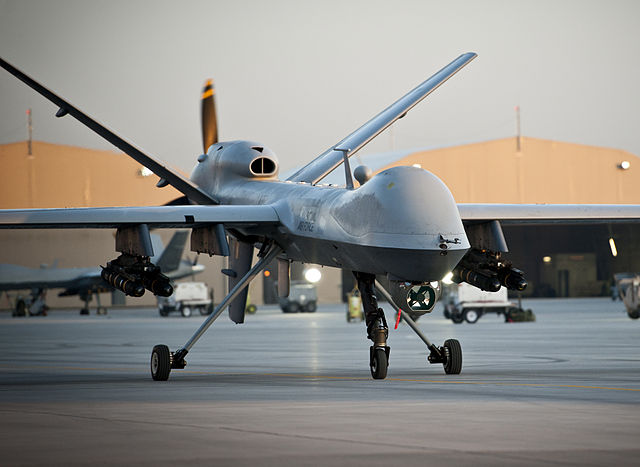 The militarization of U.S. foreign policy certainly didn't start with President Donald J. Trump; in fact, it goes back several decades. However, if Trump's first 100 days in office are any indication, he has no intention of slowing down the trend.

During a single week in April, the Trump administration fired 59 Tomahawk missiles into a Syrian airfield, and dropped the largest bomb in the U.S. arsenal on suspected ISIS tunnels in Afghanistan. This 21,600-pound incendiary percussion device that had never been used in combat--the Massive Ordinance Air Blast or MOAB, colloquially known as the "Mother of All Bombs"--was used in the Achin district of Afghanistan, where Special Forces Staff Sergeant Mark De Alencar had been killed a week earlier. (The bomb was tested only twice, at Elgin Air Base, Florida, in 2003.)

To underscore the new administration's preference for force over diplomacy, the decision to experiment with the explosive power of the mega-bomb was taken unilaterally by General John Nicholson, the commanding general of U.S. forces in Afghanistan. In praising that decision, Pres. Trump declared that he had given "total authorization" to the U.S. military to conduct whatever missions they wanted, anywhere in the world--which presumably means without consulting the interagency national security committee.

It is also telling that Pres. Trump chose generals for two key national security positions traditionally filled by civilians: the Secretary of Defense and the National Security Advisor. Yet three months into his administration, he has left unfilled hundreds of senior civilian governmental positions at State, Defense and elsewhere.

Back in 1976, however, President Gerald Ford set a very different example when he issued his Executive Order 11095. This proclaimed that "No employee of the United States government shall engage in, or conspire to engage in, political assassination."While Pres. Trump has not yet enunciated a policy on the subject of political assassinations, there has so far been no indication that he plans to change the practice of relying on drone killings established by his recent predecessors.

He instituted this prohibition after investigations by the Church Committee (the Senate Select Committee to Study Governmental Operations with Respect to Intelligence Activities, chaired by Sen. Frank Church, D-Idaho) and the Pike Committee (its House counterpart, chaired by Rep. Otis G. Pike, D-N.Y.) had revealed the extent of the Central Intelligence Agency's assassination operations against foreign leaders in the 1960s and 1970s.

With a few exceptions, the next several presidents upheld the ban. But in 1986, President Ronald Reagan ordered an attack on Libyan strongman Muammar Gaddafi's home in Tripoli, in retaliation for the bombing of a nightclub in Berlin that killed a U.S. serviceman and two German citizens and injured 229. In just 12 minutes, American planes dropped 60 tons of U.S. bombs on the house, though they failed to kill Gaddafi.

Twelve years later, in 1998, President Bill Clinton ordered the firing of 80 cruise missiles on al-Qaida facilities in Afghanistan and Sudan, in retaliation for the bombings of U.S. embassies in Kenya and Tanzania. The Clinton administration justified the action by asserting that the proscription against assassination did not cover individuals whom the U.S. government had determined were connected to terrorism.

Days after al-Qaida carried out its Sept. 11, 2001, attacks on the United States, President George W. Bush signed an intelligence "finding" allowing the Central Intelligence Agency to engage in "lethal covert operations" to kill Osama bin Laden and destroy his terrorist network. White House and CIA lawyers argued that this order was constitutional on two grounds. First, they embraced the Clinton administration's position that E.O. 11905 did not preclude the United States' taking action against terrorists. More sweepingly, they declared that the ban on political assassination did not apply during wartime.

Send in the Drones

The Bush administration's wholesale rejection of the ban on targeted killing or political assassinations reversed a quarter-century of bipartisan U.S. foreign policy. It also opened the door to the use of unmanned aerial vehicles to conduct targeted killings (a euphemism for assassinations).

The U.S. Air Force had been flying unmanned aerial vehicles (UAVs), since the 1960s, but only as unmanned surveillance platforms. Following 9/11, however, the Department of Defense and the Central Intelligence Agency weaponized "drones" (as they were quickly dubbed) to kill both leaders and foot soldiers of al-Qaida and the Taliban.

The United States set up bases in Afghanistan and Pakistan for that purpose, but after a series of drone attacks that killed civilians, including a large group gathered for a wedding, the Pakistani government ordered in 2011 that the U.S. drones and U.S. military personnel be removed from its Shamsi Air Base. However, targeted assassinations continued to be conducted in Pakistan by drones based outside the country.

In 2009, President Barack Obama picked up where his predecessor had left off. As public and congressional concern increased about the use of aircraft controlled by CIA and military operators located 10,000 miles away from the people they were ordered to kill, the White House was forced to officially acknowledge the targeted killing program and to describe how persons became targets of the program.

Instead of scaling the program back, however, the Obama administration doubled down. It essentially designated all military-age males in a foreign strike zone as combatants, and therefore potential targets of what it termed "signature strikes." Even more disturbing, it declared that strikes aimed at specific, high-value terrorists, known as "personality strikes," could include American citizens.

Ann Wright is a 29-year US Army/Army Reserves veteran, a retired United States Army colonel and retired U.S. State Department official, known for her outspoken opposition to the Iraq War. She received the State Department Award for Heroism in 1997, after helping to evacuate several thousand (more...)
Related Topic(s): Drone; Drone Wars; Foreign Policy Institute - Neocons, Add Tags
Add to My Group(s)
Go To Commenting
The views expressed herein are the sole responsibility of the author and do not necessarily reflect those of this website or its editors.