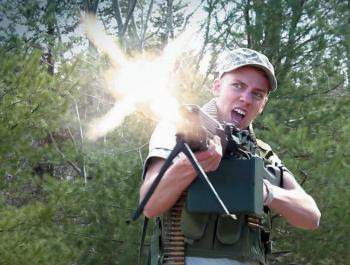 (Image by Unknown Owner)   Details   DMCA
This taken from a violent video game made by a group of kids in Brunswick, Maine calling themselves USN Films - USN refers to US Navy

There is a big dust up going on here in Maine over the discovery of a two-year spree of violent video making where local youth used public spaces to produce their "films".

A local Brunswick high school senior, who has been accepted next year at the US Naval Academy in Annapolis, is the leader of the pack of about 20 kids involved in producing the videos.  Local newspapers report that the kids have made 26 videos, viewed 8.3 million times on YouTube, and have used the public library and the former US Navy airfield in Brunswick (now called Brunswick Landing) as back drops for the videos.

In the videos youth go around killing people randomly and wantonly.

A local friend called me early this morning wanting advice on what to do about this situation.  I told her that violence and militarism is becoming "normalized" in our society because this is the role that has been determined for us in America by the oligarchy.  We aren't going to make things anymore - its cheaper to go overseas to produce "stuff" - our role under corporate globalization will be "security export".  Thus it is no coincidence that today the #1 industrial export of the US is weapons.  And when weapons are your #1 industrial export product - what is your global marketing strategy for that product line?

So the upcoming generations are being taught that "this is your future".  Endless war overseas and growing violence at home.  The next generation has to be made to feel "good and excited" that despite the fact they have no jobs - they can thrill at the idea of going into the military to kill.  On whose behalf they kill is not to be discussed.

I suggested to my friend that unless folks like us push back hard against this growing violence the debate over what is "normal" will never happen.  We discussed some ideas she could take on.  I suggested we could do a future edition of my public access TV show on the subject.

After talking with her I knew I had to do something.  I noticed a quote in the newspaper article from Steve Levesque who directs the Midcoast Regional Redevelopment Authority which now stands in charge of the former Navy base.  Once this story became public he acknowledged that he had recently had the kids evicted from the grounds of the former Navy base where they were "shooting" a video.  Levesque is the guy we've been running up against the last couple years as he is in charge of annually organizing air shows at the former Navy base.  So I sent him the following email (with a copy to two local newspapers):

I found it rather interesting to read your quote in the Times Record yesterday about the sad story of kids using Brunswick Landing (and other public places) to make their violent videos.

Your quote in the paper was good where you said, "We have to deal with this...Guns were one thing, but we have an issue in our society where we are desensitizing our youth to violence such as this.  That's a concern that I have personally."

Where my confusion comes in is that you don't seem able (or willing) to connect the dots.  Late last summer your authority had the Air Force Thunderbirds headline the air show at the former base.  Included in that air show was a "spectacular" simulated bombing with napalm on the runway that made the front page of the Forecaster.  My mind immediately flashed back to the Vietnam war and the little girl running down a road as her body was on fire from the napalm.

Have you ever stopped to wonder if your promotion of war and violence at these air shows do in fact directly contribute to this "desensitizing our youth to violence"?

We all have to take responsibility for helping to normalize this growing culture of violence and militarism in America.  The fact that you are eagerly scheduling another air show for 2013 only makes my sadness more acute.


Very soon after sending the email to Mr. Levesque he responded with the following:

Thanks for your note on this issue.  I personally believe that there is a clear distinction between the promotion of youth gun violence for the sport of it and military activities to defend our country.

For the record, Napalm was not used at the airshow.

The parents of the kids see no problem with the videos.  In fact the lead boy's father quite often participates.  (Why not just go play checkers with the kids?)  But the most troubling was the news in the article that teachers at the school often play the videos for the students.  The reporter noted one kid saying:

"Sometimes in class, when we have study halls or free periods at the end of the day, some of my teachers have actually played the videos on projectors."


We have a huge problem here in the US.  We have become a killing culture and few are willing to see how all these little seemingly unrelated pieces add up directly to build this culture of violence.  Those of us deeply concerned about this need to find more creative ways to involve ourselves directly in these conversations.

Related Topic(s): Culture; Militarism; Navy; Oligarchy; Organizing; Peace; Right Wing Freak-out; Right Wingnuts Rooting For Armagedon; School; Video, Add Tags
Group(s): Science, Technology and Society (STS), Add to My Group(s)
Go To Commenting
The views expressed herein are the sole responsibility of the author and do not necessarily reflect those of this website or its editors.