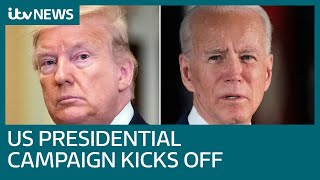 Donald Trump vs Joe Biden: The brutal digital 2020 US presidential campaign has begun | ITV News How do you wage a presidential campaign during a pandemic? Well, we are already finding out. The 2020 race for the White House is going to be unlike any ...
(Image by YouTube, Channel: ITV News)   Details   DMCA

There's two words that accurately depict our present time, unpredictable and precarious. For many people today, fear is their dominant emotion. Fear of the worst. Fear of the unknown.

Be it covid-19, unemployment, the economy, debt-national, personal, college student loans, corporate, junk bonds, fracking, stock market, soon to be evictions, commercial bankruptcy, protests over the murder by police of George Floyd, the presidential election, US provocations against China, Iran, Russia, Venezuela, Cuba, Nicaragua, North Korea, to say nothing about the Trumpster's tweets with him reacting to anything that pops into his head.

The states are opening up from the lockdown over the coronavirus. Yet we hear a second wave is coming.

Official unemployment is some 40 million people yet the system in some states has been so horrendous many people have yet to receive it.

The shutdown of the economy with all non-essential businesses shuttered may mean some (many?) will go under. Workers laid off may no longer have jobs. What happens to them?

The national debt grew by $1 trillion just last month. It stands at $26 trillion and growing. Personal debt is in the $trillions while college student debt is over 1 1/2 $trillion. The FED prints $billions, buys up corporate, junk bond debt, rescues mismanaged companies. The fracking companies that have never been profitable only survived selling junk bond debt with high interest rates. Now with oil prices tanking they can't sell new junk bonds because there's no buyers.

There's been a temporary suspension of evictions. That's about to end or has already ended in some states. Are we about to see thousands of people tossed out of their apartments onto the streets because they can't pay the rent? What about the owners of those rent complexes. They have mortgages to pay on those properties. What happens if they can't pay? Bankruptcy for many? We haven't seen the cascading effect that will likely ensue with these evictions and mortgages in default about to come in the few months.

Retired. The author of "DECEIT AND EXCESS IN AMERICA, HOW THE MONEYED INTERESTS HAVE STOLEN AMERICA AND HOW WE CAN GET IT BACK", Authorhouse, 2009
Related Topic(s): Accountability; Bankruptcy; Debt; Depression; Election; Evictions; Fear; Future; Issues; Joe Biden; (more...) Lockdown; Personal; Protest; Shutdown; Trump; Unemployment, Add Tags  (less...)
Add to My Group(s)
Go To Commenting
The views expressed herein are the sole responsibility of the author and do not necessarily reflect those of this website or its editors.