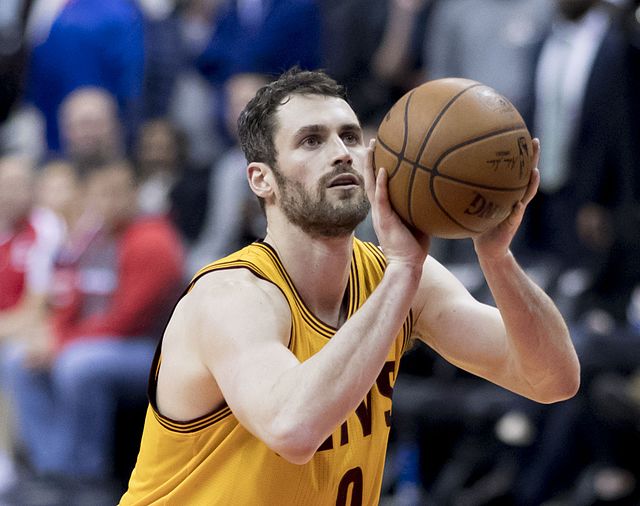 Kevin Love
(Image by (From Wikimedia) Keith Allison from Hanover, MD, USA, Author: Keith Allison from Hanover, MD, USA)   Details   Source   DMCA
p>"For behind the sense of insecurity in the face of danger, behind the sense of discouragement and depression, there always lurks the basic fear of death, a fear which undergoes most complex elaborations and manifests itself in many indirect ways".No one is free of the fear of death." - Gregory Zilboorg, psychanalyst

"What we play is life." - Louis Amstrong

In his moving essay revealing his existential anxiety and panic attack, NBA star Kevin Love has touched a nerve that underlies not just sports and male experience, but life itself. He is right to say, "This is an everyone thing." In doing so, he has performed a public service far beyond getting men and boys to open up about their fears and feelings. He has, as befits his surname, opened many people to a consideration of the marriage of love and death, and why all efforts to divorce them result in the diminishment of life's passion and intensity.

Commenting on the unavoidable but often denied link between love and death, the important American psychologist Rollo May said this in Love and Will:

"To love means to open ourselves to the negative as well as the positive -- to grief,sorrow and disappointment as well as to joy, fulfillment, and an intensity of consciousness we did not know was possible before."

So it is fitting that in telling us of his conversations with a therapist, the one personal experience Kevin tells us about is the death of his Grandma Carol, who meant so much to him and was like another parent when he was growing up. Busy with his basketball career, he didn't see her when she was dying. "I felt terrible that I hadn't been in better touch with her in her last years," he writes. Deeply pained at losing her and guilty about his behavior, he shared this with no one, bottling it up as he had learned since boyhood (Be strong, be a man), and like the athlete that he is, perhaps thought that if he did not dwell on this loss, the next game would be a win and he could somehow move on. But this never works for long, as Love learned when panic burst into his consciousness and took him down during a game last November. "It came out of nowhere," he says, having learned, however, that nowhere is somewhere, even when a surprise.

Substitute sportswriter for athlete, as Richard Ford does in his dazzling novel, The Sportswriter, whose main character Frank Bascombe, a sportswriter haunted by the death of his young son from Reye's syndrome but trying to lose himself in the ordinariness of sportswriting, says, "Since after all, it is one thing to write sports, but another thing entirely to live a life," and we have Love's cautionary tale.

For sports (shopping for women) is the perfect metaphor for the modern American male's flight from authenticity. As the etymology of the word sport attests (from old French, desporter to divert, literally "to carry away"), sports are a diversion from something. Let's call it "real life," the place from where, as Ernest Hemingway so aptly put it in the title to his short story, "The Winner Takes Nothing." Trophies are handed out at post-season dinners, but as the American philosopher William James said, "The skull will grin in at the banquet."

Although sports can inspire one to think deeply, for most people, athletes and spectators alike, sports are a diversion from existential matters involving relationships, fears, deep feelings, life's meaning, love and loss, death, etc. While surely fun, entertaining, and lucrative for professionals, sports are also absurd since they involve movements through time and space toward unnecessary and fictitious goals where someone wins (lives) and someone losses (dies) in a game of unreality. In sports we play to overcome artificial and superfluous obstacles for fun and money -- and for deeper reasons we may not realize.

Take golf, for example (my apologies to golfers). Why does anyone care who can hit a little white ball with a stick in the fewest strokes down stretches of green grass into a hole in the ground? Many do. They spend enormous amounts of time and money trekking after those little white balls. They care primarily because it's fun, and fun is good. Such fun is utterly meaningless in the larger scheme of things, but many find it relaxing from the "stress" of everyday life -- a relaxing distraction. And of course distractions can be good in moderation. It is not sports that are the problem, but the obsession with them.

I knew a woman who felt her husband was overly obsessed with sports, and although she was wrong, she used to say to him, "With you it's balls, balls, balls." To which he would respond, also erroneously, "And with you it's malls, malls, malls." But their humorous exchange catches a widespread truth about men and women in American society where there are plenty of obsessively distracted people of both sexes.

Sports only matter because they don't. And it is in that gap between mattering and not where panic, anxiety, and depression can appear "out of nowhere." Another athlete, the Nobel Prize winning French author Albert Camus, a soccer goalie in his youth and a lifelong fan, phrased this experience differently when he said, "At any street corner the feeling of absurdity can strike any man in the face."

Related Topic(s): Anxiety; Death; Denial; Panic; Sports, Add Tags
Add to My Group(s)
Go To Commenting
The views expressed herein are the sole responsibility of the author and do not necessarily reflect those of this website or its editors.