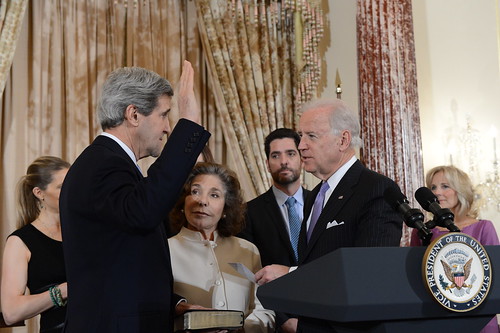 On Thursday afternoon, the Washington Post sent out a news alert headlined "John Kerry Endorses Biden in 2020 Race, Saying He Has the Character and Experience to Beat Trump, Confront the Nation's Challenges." Meanwhile, in Iowa, Joe Biden was also touting his experience. "Look," Biden said as he angrily lectured an 83-year-old farmer at a campaign stop, "the reason I'm running is because I've been around a long time and I know more than most people know, and I can get things done."

But Kerry and Biden don't want to acknowledge a historic tie that binds them: Both men were important supporters of the Iraq war, voting for the invasion on the Senate floor and continuing to back the war after it began. Over the years, political winds have shifted -- and Biden, like Kerry, has methodically lied about his support for that horrendous war.

The FactCheck.org project at the Annenberg Public Policy Center has pointed out: "Kerry agreed that Saddam Hussein had weapons of mass destruction and should be overthrown, and defended his war authorization vote more than once -- including saying in a May 2003 debate that Bush made the 'right decision to disarm Saddam Hussein.' . . . Kerry also told reporters in August 2004 that he would have voted for the resolution even if he had known that the U.S. couldn't find any weapons of mass destruction."

As for Biden, he can't stop lying about his major role in pushing the war authorization through the Senate five months before the March 2003 invasion. During his current presidential campaign, more than 16 years after the invasion, Biden has continued efforts to conceal his pro-war role while refusing to admit that he was instrumental in making possible the massive carnage and devastation in Iraq.

Related Topic(s): Campaign Endorsements; Joe Biden; Kerry John; Presidential Endorsements, Add Tags
Add to My Group(s)
Go To Commenting
The views expressed herein are the sole responsibility of the author and do not necessarily reflect those of this website or its editors.