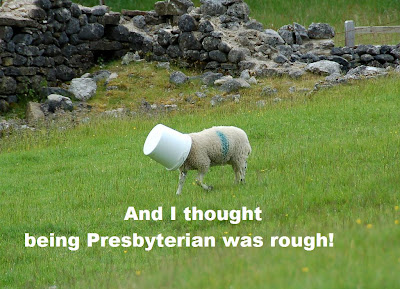 I won't get into a detailed definition about what Christianity is, so let's just say that it is the organization that supposedly follows the teaching of Jesus the Christ of Nazareth as set down in the four Gospels of the Bible's New Testament. Anything more than that should be left to Biblical textual critics like Bart Ehrman and scholars of religious philosophy like Karen Armstrong. Yes, I respect these people very much, but the truth is that they haven't been allowed to make any real headway in teaching today's Christians about their own religion and about their own Bible.

Maybe their works will be published in the form of coloring books someday.

Hey, everyone knows I have to take a snipe at today's mass of "faithful." O.K., so I'll qualify myself: most (but not all) of today's Christians don't have the slightest knowledge of their own religion. They know nothing of early Christianity except the part about Romans and lions. They know nothing about Christianity's founders past a ragtag group of apostles whom most cannot name. They think that the Bible was always composed of the same number of books from day one (Christ's birth on December 25th). They're in the dark about the Dark Ages. They may have heard about Martin Luther and his split from Rome, but about popes even Catholics know very little. They know that some Christians in history were a bit anti-Semitic, but that's where their knowledge of Jewish persecution ends. They may have heard about the Crusades and how brave, chivalrous knights tried to sweep away Muslims from the Holy Land, but they don't know that the roots of Christianity and Islam come from the same source and that, like Judasim, they are Abrahamic religions. Witch burnings and the like, of course, they save for Halloween and Hell Houses. Read Gary Laderman's account of Christianity throughout America's history. Lederman is the Director of Religion Dispatches and Professor and Chairperson of the Department of Religion at Emory University. He really gives a case for Christianity being a dangerous religion.

But don't all of those vagaries give today's Christians a rather skewed vision of their own religion? Of course. It could then be argued that the more narrow and self-righteous view a people have of their own religion, the better it is to control them. As with the contradictions and complexity of the Bible, a simple but very narrow, very definitive construct is the best way to keep control: today's Southern Baptist preacher, for example, would never encourage scholarship in any form from his congregation. To do so would mean answering questions which threaten to make Christianity look less unique. Instead, tell them that the Bible is the exact word of God and tell them to forget all that history stuff.

In other words, keep 'em stupid.

It's taken us a long time to get here, in this plummet from Francis Schaeffer to Glenn Beck. In order to be this gullible, American Christians have had to endure years of vacuous talk about undefined "revival" and "turning America back to God" that was less about anything uniquely Christian than about, at best, a generically theistic civil religion and, at worst, some partisan political movement.

The point that Rev. Moore touches on (but marginally) is what I've said in several past articles: America has made a religion out of entertainment and an entertainment out of religion. And in being dumbed down, today's masses of the Christian Right look more like Coliseum Romans being entertained at the sight of other people being denied rights or discriminated against. Francis Schaeffer's own own, Frank Schaeffer has soundly denounced today's Christian Right:

"In the mid 1980s I left the Religious Right, after I realized just how very anti-American they are."

So what was our Founding Father's perception of Christianity? Glenn Beck's "historian", David Barton, insists that their view was the same as today's, but, alas, it was much different: they were men who were educated in the European Enlightenment tradition. They knew about Plato and Aristotle as well as Erasmus. Many of them were actually educated in England. They had to be, if they wanted to have any standing at all, even in the "outback" of the colonies. They strove (as was the educated lifestyle of the time) to be "Renaissance" men and to know as much as possible about all things. Jefferson and Franklin were both practitioners of science, literature, mechanics, physics and even (horrors) metaphysics. Some were Freemasons. They did not envision a democracy as we see it, but a plutocracy run by men of education and property. This last precept is the reason why the populace were not invited to vote for senators nor were they allowed to vote for President.

The Founding Fathers had also known of the disastrous coupling of government and religion and not just from England: by that time, Europe had seen some 400 wars in less than 350 years and religion had its hand in every one of them. They knew about the Salem Witch trials and knew that many Native Americans had the fatal contempt of local "Christians" who even fought with themselves (Puritans, vs. Baptists vs Anabaptists vs Holy Rollers, etc. etc.). They certainly wanted everyone to worship as he pleased, but not to the detriment of everyone else. They would never have approved of the kind of yoke Constantine imposed upon the Romans.

Rev. Dan Vojir is has been writing/blogging on religion and politics for the better part of ten years. A former radio talk show host (Strictly Books " Talk America Radio Network) and book publisher, Dan has connected with some of the most (more...)
Related Topic(s): America Is A Christian Nation; Bible And Politics; Christianity; Christians Only; Dumbing Down; Founding Fathers; Francis Schaeffer; Frank Schaeffer; God; Religion-Politics; (more...) Religious Right; Right Wing Mindset Culture, Add Tags  (less...)
Add to My Group(s)
Go To Commenting
The views expressed herein are the sole responsibility of the author and do not necessarily reflect those of this website or its editors.