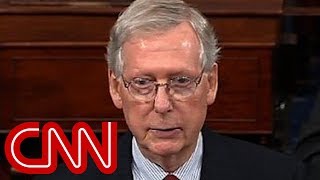 Mitch McConnell guarantees a vote on Kavanaugh Sen. Mitch McConnell (R-KY) says that Brett Kavanaugh will get a vote on the Senate floor amid sexual assault allegations against the Supreme Court nominee.
(Image by YouTube, Channel: CNN)   Details   DMCA

From the day Trump nominated Brett Kavanaugh to fill the vacancy of Justice Anthony Kennedy retiring from the Supreme Court the "fix" was in. Why? The Republicans controlled the Senate and a simple majority vote would confirm Kavanaugh's nomination.

Sure there was one Republican rejection, Senator Lisa Murkowski of Alaska offset by one defection by the Democrats Joe Manchin from West Virginia. But does anyone believe Senate Majority Leader Mitch McConnell would let the vote proceed if he didn't have the votes needed to make sure Kavanaugh would be confirmed? Please.

Even though Kavanaugh's sexual abuse was brought forth in the sworn testimony of Christine Blasey Ford before the Senate Judiciary Committee when both were in high school in the 1980's and there was a limited 4 day FBI investigation by the FBI it didn't matter to McConnell. There was no way he was going to delay the vote on Kavanaugh's nomination.

One could say the "fix" had earlier been in when McConnell's Republican led Senate wouldn't let Obama's nominee for the Court Merrick Garland be voted on to take the place of Justice Antonin Scalia who died in his sleep on February 13, 2016. Call the ruses by McConnell and his Republican hacks what you will but the bottom line is they were able to delay consideration for Scalia's replacement until Trump took office in January, 2017 whereupon Neil Gorsuch was nominated and in April was confirmed by what else the Republican majority in the Senate.

As to Kavanaugh this is not to say many of the women-and men-were naive in believing they could stop his nomination. Such thinking would have prevented women's suffrage and eventually women's right to vote in 1920 with the passage of the 19th Amendment.

But don't forget this is the US where the "good ole boy" attitude prevails as well as "boys will be boys".

Also the idea of the most qualified, most brilliant to be nominated for SCOTUS is a thing of the past. Maybe it never was a consideration. Now it's purely a political process with nothing to do with a nominees jurisprudence excellence.

Think about it. "Dubya" Bush got elected in 2000 by virtue of a Republican dominated SCOTUS directly interfering with the election by stopping the recount in Florida, previously ordered by the Florida Supreme Court. If the recount were allowed to proceed Al Gore would most probably have won the election.

Though SCOTUS appointments are for life and ideally those seated supposed to be above partisan politics the reality makes that ideal something only for a boy or girl scout to adhere to.

Every appointment to the Court, every decision taken by SCOTUS has political partisanship written all over it. One day it'll be the Democrats in the Senate majority and if there's a vacancy on the Court it will be their turn to stifle the Repubs resistance to the Dems nominee.

Well so much for the "swing" vote Dems saw in Kennedy.

Could it be the Dems are also up to their eyeballs accepting big corporate largesse. It's no wonder why they've refrained from calling the Repubs the party beholden to big moneyed interests. When you play the same big money game as the Repubs you're no longer the party of the working class who long ago abandoned you.

Retired. The author of "DECEIT AND EXCESS IN AMERICA, HOW THE MONEYED INTERESTS HAVE STOLEN AMERICA AND HOW WE CAN GET IT BACK", Authorhouse, 2009
Related Topic(s): Kavanaugh Nomination; McConnell-Mitch, Add Tags
Add to My Group(s)
Go To Commenting
The views expressed herein are the sole responsibility of the author and do not necessarily reflect those of this website or its editors.