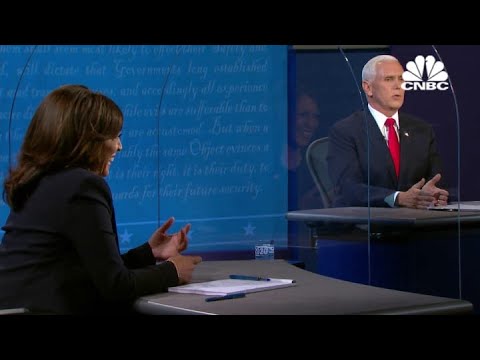 The Pence-Harris debate was what disagreements among normal people might look like, as opposed to the weird behavior of Trump in the first presidential debate. While pundits are saying that it lacked fireworks, that is not true if you define fireworks as policy disagreement as opposed to mud wrestling.

The election at this point seems to be Biden-Harris's to lose. Harris may not have had a "moment." But she did what she needed to do. She demonstrated forcefulness and that she is on top of the issues. She showed that an African-American woman and an Asian-American woman can stand her ground against a privileged white male. She was likeable and sharp. She seems a credible president, which is one of the jobs of a vice presidential candidate.

Here are some moments where I thought Kamala Harris drove point crucial points, along with a tally of Pence's worst lies.

1. The most impressive moment in Kamala Harris owning Mike Pence was her opener, in which she laid out the case against this administration on its handling of the coronavirus. Polls show that this is an issue at the top of voter concerns. She needed to make this case, and she did:

"The American people have witnessed what is the greatest failure of any presidential administration in the history of our country. And here are the facts. 210,000 dead people in our country in just the last several months. Over 7 million people who have contracted this disease. One in five businesses closed. We're looking at frontline workers who have been treated like sacrificial workers. We are looking at over 30 million people, who in the last several months, had to file for unemployment. And here's the thing, on January 28th, the vice president and the president were informed about the nature of this pandemic. They were informed that it's lethal in consequence, that it is airborne, that it will affect young people, and that it would be contracted because it is airborne. And they knew what was happening, and they didn't tell you.

"Can you imagine if you knew on January 28th, as opposed to March 13th, what they knew, what you might've done to prepare? They knew, and they covered it up. The president said it was a hoax. They minimized the seriousness of it. The president said, "You're on one side of his ledger if you wear a mask. You're on the other side of his ledger if you don't." And in spite of all of that, today, they still don't have a plan. They still don't have a plan. Well, Joe Biden does. And our plan is about what we need to do around a national strategy for contact tracing, for testing, for administration of the vaccine, and making sure that it will be free for all. That is the plan that Joe Biden has and that I have, knowing that we have to get a hold of what has been going on, and we need to save our country. And Joe Biden is the best leader to do that."

2. Another moment where Harris clearly had the best of the argument was her comments on Trump-Pence packing the courts mostly with white male arch-conservatives, many of them unqualified.

"Do you know that of the 50 people who President Trump appointed to the court of appeals for lifetime appointments, not one is Black?"

Politifact notes that according to Bloomberg, Trump has actually confirmed 53 life appointments to the court of appeals. And, as she said, none were African-American. Some seven were Asian-American and just one was Latino.

Politifact also mirrored this graphic from The New York Times showing the Trump appointees to the court of appeals, just to reinforce Harris's point.

You know what 15.4 percent of 53 is? Eight. If Trump's judicial appointments had not actively discriminated against persons of African descent, there should have been 8 Black judges on the court of appeals.

3. Harris was also strong on the environment and the climate emergency. Climate is another issue voters increasingly feel strongly about, and on which a majority of Americans in polls are willing to base their choice of candidates.

"And part of those jobs that will be created by Joe Biden are going to be about clean energy and renewable energy. Because, you see, Joe understands that the West Coast of our country is burning, including my home state of California. Joe sees what is happening on the Gulf states, which are being battered by storms. Joe has seen and talked with the farmers in Iowa whose entire crops have been destroyed because of floods.

Related Topic(s): Climate; Debate; Fracking; Kamala Harris; Lies; Trump, Add Tags
Add to My Group(s)
Go To Commenting
The views expressed herein are the sole responsibility of the author and do not necessarily reflect those of this website or its editors.