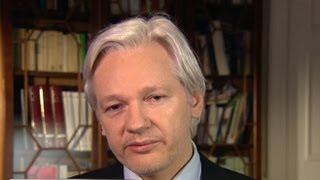 This month, it will be six years since Julian was forced to take refuge in the Ecuadorean embassy in London. He had been warned; the US Department of Justice was likely to file an application with Britain's Home Office for his extradition to the United States. The allegations against Julian and WikiLeaks in the US were subsequently declared secret by a US District Court judge, but it has since been confirmed that a grand jury in Virginia has concocted a number of possible "charges" against the WikiLeaks founder.

The most likely of these is "espionage," which harks back to a long-defunct First World War law designed to punish conscientious objectors.

Julian is not an American; neither has he "betrayed" any state. His "crime" has been free journalism and publishing, which are protected under the US Constitution, a document whose sanctity has apparently been jettisoned.

WikiLeaks has done no more than the New York Times and the Washington Post in their celebrated past -- it has revealed the truth about rapacious wars and the machinations of a corrupt elite. In response to this truth-telling, a Cold War fantasy known as "Russiagate" has attempted to paint Julian -- and by extension all journalists -- as some "spies."

What CNN and the rest of the media do not tell you is that the most senior of US intelligence have admitted under oath that their agencies have found not the slightest evidence to link Assange or WikiLeaks to Russia.

Julian's status as a political refugee under the 1951 Convention has the backing of the United Nations, whose Working Party on Arbitrary Detentions has demanded an end to his persecution. The Working Party, one of the world's highest authorities on international law, conducted an investigation in which the British Government took part, and found unanimously in Julian's favour.

The UN calls on Britain to honor its responsibilities under the Convention and give Julian right of passage out of the embassy.

Although his health is suffering, Julian cannot go to a hospital for an X-ray as almost certainly he will be arrested.

Since Easter, Julian's isolation has become extreme; according to Human Rights Watch, "His refuge in the embassy looks more and more like solitary confinement."

He is denied basic communications; he is refused access to the phone and internet and visitors are forbidden. In forging a new, deferential relationship with the United States, President Lenin Moreno and the Ecuadorian government clearly aim to make life so difficult for Julian that he is silenced completely or he is forced to leave the embassy, into the waiting arms of the police.

A US extradition application is likely to follow and Julian will be destined for the kind of penal hell-hole that Chelsea Manning endured. The former president of Ecuador, Rafael Correa, whose government granted Julian political asylum, has condemned his treatment as "torture."

We at Courage ask people to support vigils on June 19 -- at the Ecuadorean Embassy in London, 6-8pm, info here, as well as the demonstration in Sydney, Australia on 17 June, at 1pm at Town Hall Square, info here.

John Pilger grew up in Sydney, Australia. He has been a war correspondent, author and documentary film-maker. He is one of only two to win British journalism's highest award twice, for his work all over the world. On 1 November, he was awarded (more...)
Related Topic(s): Extradition; Julian Assange; Police; Silenced; Suffering; Wikileaks, Add Tags
Add to My Group(s)
Go To Commenting
The views expressed herein are the sole responsibility of the author and do not necessarily reflect those of this website or its editors.