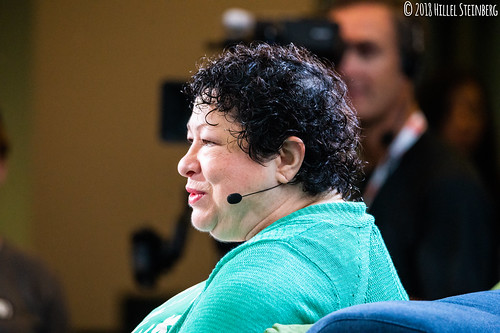 The Trump administration thinks the court is its personal fixer. The court isn't doing much to disabuse it of this idea.

I remembered reading something about this story yesterday. Seems Sotomayor and Ginsburg were the only ones to dissent on some lower court asylum ban ruling. It didn't make sense at the time.

"Justice Sonia Sotomayor wrote a brief but pointed dissent Wednesday evening from a Supreme Court order that effectively locked nearly all Central American migrants out of the asylum process. Asylum allows foreign nationals who face certain forms of persecution to seek refuge in the United States.

"The Court's order is temporary, and it only allows the asylum ban to remain in effect while the case is working its way through the courts. It stays a lower court decision that blocked the ban. Though this litigation will continue to percolate in lower courts, other judges are likely to read the Supreme Court's order as a sign that a majority of the justices will ultimately uphold the ban.

"As is often the case with such temporary orders, there was no majority opinion and thus no explanation of why the Court ruled the way it did or even how each member of the Court voted. We only know that Sotomayor voted against the stay, and that Justice Ruth Bader Ginsburg joined Sotomayor's dissent."

I felt there was some major confusion as to why there were no numbers on who voted which way or for what exactly.

"The sharpest part of Sotomayor's opinion may be its final paragraph, which accuses a majority of her colleagues of bypassing the Court's ordinary procedures in order to bail out the Trump administration.

"[G]ranting a stay pending appeal should be an 'extraordinary' act. Unfortunately, it appears the Government has treated this exceptional mechanism as a new normal. Historically, the Government has made this kind of request rarely; now it does so reflexively. See, e.g., Vladeck, The Solicitor General and the Shadow Docket, 133 Harv. L. Rev. (forthcoming Nov. 2019). Not long ago, the Court resisted the shortcut the Government now invites. I regret that my colleagues have not exercised the same restraint here. I respectfully dissent."

So, some on the Supreme Court are basically doing this ass backward from how it is usually done. The last paragraph says it all.

"If that's the case, it should worry anyone who cares about the rule of law."

"The most interesting part of Sotomayor's dissent may be the citation to a forthcoming law review article by Stephen Vladeck, a law professor at the University of Texas. In that piece, Vladeck notes that Trump's Justice Department has been far more aggressive than its predecessors in asking the Court to intervene at early stages of litigation. 'To take one especially eye-opening statistic,' Vladeck writes, 'in less than three years, the Solicitor General has filed at least 20 applications for stays in the Supreme Court (including 10 during the October 2018 Term alone).'

Related Topic(s): Court Decision; Dissent; Justice Denied; Sotomayor; Supreme Court Justice Ruth Bader Ginsburg; Trump, Add Tags
Add to My Group(s)
Go To Commenting
The views expressed herein are the sole responsibility of the author and do not necessarily reflect those of this website or its editors.